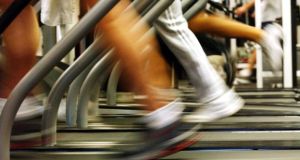 The survey found 37 per cent of respondents were less physically active than they were five years ago. Photograph: Spencer Platt/Getty Images

Irish people display “an alarming lack of knowledge” about the benefit of exercise and appear to know very little about the critical factors which can lead to obesity, according to a new survey.

Research carried out by the Irish Society of Chartered Physiotherapists (ISCP) found that 82 per cent of those polled were unaware adults needed at least 30 minutes of exercise three times a week to remain healthy. Almost half did not know that physical inactivity was a high causation factor in death.

The survey also found that 37 per cent of people polled were less physically active than they were five years ago, with those aged over 55 and between 18-24 age brackets most likely admit to doing less exercise.

All told, 41 per cent of the over 55s said they were exercising less while 39 per cent of those aged between 18 and 24 were in the same boat.

Dubliners were most likely to have increased their exercise levels over the last five years with 50 per cent saying they were doing more compared with 41 per cent Munster, 37 per cent in Connacht and Ulster and just 35 per cent in the rest of Leinster.

The online survey was carried out among 1,000 Irish adults controlled by age, gender and region.

In total, 97 per cent of adults didn’t know that children under the age of five were the group most at risk of becoming obese and remaining obese.

The national health survey was commissioned by the ISCP in advance of World Physiotherapy Day on September 8th. “The ignorance of the main facts related to the benefits of exercise for positive health is both startling and alarming and requires the immediate raising of public awareness by the Government and the HSE,” said ISCP president Jill Long.