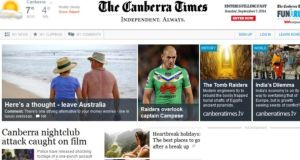 Ireland’s Ambassador to Australia Noel White has complained to an Australian newspaper after it described a man who was brain damaged in an attack as a “drunk Irish tourist”.

Timothy McCarthy (43) was on life support after being assaulted in Canberra in July 2011. The Killarney man survived, but suffered a severe brain injury.

Canberra resident Daniel Byrne (21) was subsequently sentenced to 3½ years’ jail for the attack on Mr McCarthy.

But, last week, Mr Byrne won an appeal of the case because the trial judge had misinterpreted a key piece of evidence.

During the trial, witnesses told the court they heard Mr Byrne say: “It was his fault”. But in summarising the case, the judge mistakenly said Mr Byrne had said: “It’s my fault”.

In its report on the appeal, the Canberra Times newspaper referred to Mr McCarthy as “a drunk Irish tourist” in the first paragraph.

Mr White said he is “dismayed that the reference to the victim in this tragic case is qualified by the adjective ‘drunk’”.

“These things give offence; they have to be called out. They have to be drawn to the public’s attention when they occur so that they don’t happen again,” he said.

Mr White says it does not matter whether Mr McCarthy had taken alcohol. “Whether or not this was the case, I am at a loss to know what relevance it could have in the matter reported.

“Is it intended to suggest the victim was in some way complicit in what occurred? I hope not.

“Or perhaps it is simply gratuitous and pejorative stereotyping. On any interpretation, it is unacceptable.

“Sadly, and more importantly, it can only add to the distress of Timothy McCarthy and his family who … have suffered enough,” he said.

In a statement to The Irish Times, the newspaper said: “The Canberra Times’ reporting of this case has been based purely on evidence presented to the court …

“This evidence was important to the prosecution case and the trial as it demonstrated that Mr McCarthy was vulnerable and posed no threat to his attacker,” the statement said.