Eamon Gilmore says it is possible to get a deal on parades, flags and the past before the Twelfth 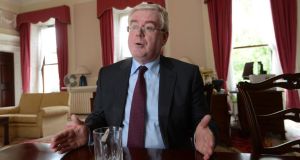 Tánaiste Eamon Gilmore is in Belfast today to discuss whether there are any means of pressing forward with the Haass proposals on parades, flags and the past. Photograph: Cyril Byrne/The Irish Times

The North’s main parties with the assistance of the British and Irish governments are to make a determined effort to achieve a deal on the past, parades and flags before the height of the marching season, Tánaiste Eamon Gilmore said this afternoon.

The five main parties are to engage in two sets of three-day intensive talks later this month to try and get agreement around the Haass proposals on parades, flags and the past, he said.

“There is a window between the end of the election period and the height of the marching season where political leaders can reach agreement on the outstanding issues that arose from the Haass process. I believe that is possible to be done,” said Mr Gilmore.

US diplomat Dr Richard Haass published proposals on how the three contentious issues might be addressed at the start of the year. These were based on months of talks which he chaired with the North’s five main parties.

Mr Gilmore, who was in Belfast today meeting senior political and business leaders including First Minister Peter Robinson and Deputy First Minister Martin McGuinness said that notwithstanding the difficulty of achieving agreement he believed a deal was possible before the Twelfth of July.

“It is capable of being done between now and the Twelfth although I don’t know if it will be done,” he said.

The talks will be convened by Mr Robinson and Mr McGuinness, it is understood.

This fresh engagement has resulted from contacts between the British and Irish governments and the five main parties - the DUP, Sinn Féin, the SDLP, the Ulster Unionist Party and Alliance.

“The main thing that I am trying to do is build on the momentum that I think is coming back into the whole talks process around flags, parades and the past,” he said.

He met business leaders today and launched a new “reconciliation fund strategy” aimed at improving relations across communities within Northern Ireland and throughout the island.

Mr Gilmore will brief the US administration in Washington next week on developments. He indicated that while Dr Haass would be maintaining an interest in the talks that he would not be directly involved.