Institutes of technology mergers a ‘byword for cuts’, TUI told 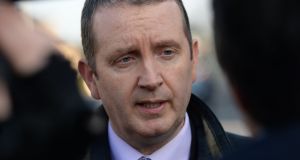 The Teachers’s Union of Ireland (TUI) president Gerry Quinn. The union has warned of industrial action in the event of unilateral moves by the Government to merge institutes of technologies. File photograph: Dara Mac Donaill/The Irish Times.

The Teachers’s Union of Ireland (TUI) has warned of industrial action in the event of unilateral moves by the Government to merge institutes of technology.

TUI president Gerry Quinn told delegates at the union’s annual conference in Killarney that in an era of brutal education retrenchment, mergers had “become a byword for more cuts”.

He said the outgoing Government had tried unsuccessfuly to rush the Technological Universities Bill through the Oireachtas before the election. He said this contained a number of threats including a lack of adequate protection for terms and conditions of employment and provisions for local and regional education needs.

Mr Quinn said while the Bill did not pass, the TUI had in the meantime secured a strong mandate from its third level members for industrial action to seek national negotiations before there is any further movement on mergers or on the Technological Universities Bill.

“We have issued a directive prohibiting co-operation with mergers and we continue to use our mandate as necessary to oppose any unwanted merger, to oppose any deterioration of members’ conditions of service and to oppose the undermining of the position of academics and the provision of regionally-balanced and equitable education and training services,” he said.

Mr Quinn also said no intelligent observer of the TUI would have been surprised when its members voted to reject the Lansdowne Road public service pay deal.

He said the accord “disgracefully ignores the many thousands of teachers and lecturers who are exploited and discriminated against in their pay”.

“TUI will not tolerate indifference and inaction on the burning issue of young teachers and lecturers without work or struggling to make a living.”

Mr Quinn also said there was a “deathly silence” in the Lansdowne Road deal on other issues affecting TUI members such as the unsustainable workloads of lecturers in institutes of technology and the absence of proper contracts and conditions for many working in the further and adult education sectors.

He said while members of other unions had agreed to accept the majority decision of the Public Services Committee of the Irish Congress of Trade Unions toback the Lansdowne Road accord, the TUI had determined to continue campaigning until its issues were addressed.

“We will not be victims of the tyranny of the majority”, he said.