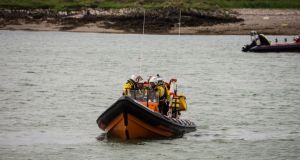 An image from the Derrynane Inshore Rescue Facebook page. A 92-year-old war veteran is recovering in hospital after he was medically evacuated by rescue volunteers from a south Kerry island.

A 92-year-old war veteran is recovering in hospital after he was medically evacuated by Derrynane Inshore Rescue volunteers from a south Kerry island.

The injured man, who is said to have been a survivor of the Burma campaign during the second World War, was on Einaun island in the Kenmare river when the accident occured on Sunday.

However, he did not call for assistance until Monday as he “didn’t want to disturb anyone”, according to the rescue service team.

Six volunteers, including coxswain Michael Donnelly, responded to the call-out by Valentia Coast Guard, and transported Health Service Executive paramedics from Oysterbed pier out to the island.

The casualty was taken to shore by stretcher and by ambulance to hospital in Tralee, Co Kerry.

David O’Mahony of Derrynane Inshore Rescue said “we cannot stress enough that people should look for help immediately - we are there for the communities of the Kenmare river 24/7”.

The Derrynane Inshore Rescue Service is part of the Community Rescue Boat Ireland (CRBI) network, and covers Derrynane and the outer Kenmare Bay area, including the northern Beara peninsula.

It gets about 11 call-outs a year. One of its more unusual rescues involved a fishing skipper and his dog, both of whom were thrown into the water after the vessel struck a rock and sank in June 2013.