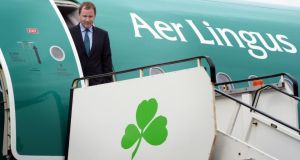 Aer Lingus chief executive Stephen Kavanagh at Dublin Airport. The trade union Impact has said that any assurances that the IAG aviation group has given in relation to the proposed sale of the State’s stake in Aer Lingus are worthless. Photograph: Eric Luke/The Irish Times

Any assurances provided by the aviation group IAG on jobs or connectivity are worthless and the Government should refuse to sell it its stake in Aer Lingus, the trade union Impact has said.

Representatives of pilots at Aer Lingus also maintained that if IAG gained control of the airline, it would eventually become more difficult to fly from Ireland to North America and its existing slots at Heathrow airport in London would be lost.

Impact’s services and enterprises divisional conference today (on Thursday) passed an emergency motion stating that as senior management in both Aer Lingus and IAG had refused to provide commitments regarding terms and conditions for its members, any assurances given to the Coalition on the safety of current jobs, the provision of future employment and connectivity were valueless.

“On that basis, conference calls upon the Minister [for Transport] to oppose the sale of the Government’s stake,” the motion stated.

Impact national secretary Matt Staunton said there had never been a case where a merger of any utility or airline had resulted in prices going down, only in prices going up.

He said Impact had held a meeting with the chief executives of Aer Lingus and IAG in March at which it outlined that if the takeover was to go ahead “we would be looking for a suite of assurances”.

He said the union was seeking for a legally binding agreement regarding the terms, conditions and job security for existing personnel.

“If those two employers are not able to give the most basic assurances to the main union in Aer Lingus that they are prepared to protect the jobs and terms and conditions of members, what worth, at all, is any assurances that they have given to the Government that conceding to their takeover bid will result in more jobs, safe jobs and secure jobs?

“I have a very simple message to give to the Government, we do not believe any assurances that IAG and the current Aer Lingus management may give are worth anything.”

Evan Cullen of the Irish Airline Pilots Association, which is a branch of Impact, said Scotland had a greater population than Ireland and has a diaspora in North America that was equal to that of Ireland.

“The reason for this is that IAG’s subsidiary in the UK, British Airways, does not operate direct services from North America into Glasgow or Edinburgh.

“It forces everyone through its Heathrow hub so they can get a double ticket on them.”

Mr Cullen said there was also no direct British Airways service from Manchester to North America.

Mr Cullen said that if the IAG takeover of Aer Lingus went ahead that eventually - maybe in 5 or 10 years - it would be more difficult for Irish people to access North America unless they were using a US airline, because IAG would extract value by forcing passengers to go through the Heathrow hub.

He also maintained that “the day after any commitment given to the Government ends, those [current Aer Lingus ]slots at Heathrow will go somewhere else, because IAG can make far more money somewhere else”.