New farm organisation set to be launched within weeks 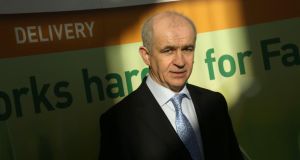 IFA president Eddie Downey before Tuesday’s agm. “I know what it’s like to try and head up an organisation, having worked in it for 25 years.” Photograph: Finbarr O’Rourke

IFA president Eddie Downey has said he wished a new rival farm organisation well but warned they would face a tough battle.

The new national organisation, which has not been named yet, will be launched within weeks, according to its spokesman Colm O’Donnell, who resigned from the IFA to set up the new body. Another IFA member, Brendan Joyce, resigned as chairman of IFA’s Connemara branch to set up the organisation.

The plan originated with hill and commonage farmers who felt farm organisations were not representing the views of marginalised, low-income farmers during the negotiations.

“I wish them well,” Mr Downey said. “But it’s a difficult place out there. I know what it’s like to try and head up an organisation, having worked in it for 25 years,” he said. “I know they are well-meaning but I would hope they would allow farmers to hear the accurate information and get accurate information and not mislead people. There’s been fear driven into some farmers unnecessarily and I welcome the opportunity . . . to allay those fears.”

He said he could foresee a future where “Irish” was a byword for the highest quality food and drink. Mr Kenny said he could see a time when an American couple would scan their menu for the grass-fed Irish beef.

“Where a Chinese mother clears the supermarket shelves of Irish infant formula and a French worker enjoys a class of triple-distilled Irish whiskey after a day’s work,” he said.

“After tireless work by all stakeholders, Irish beef is now back in Japan, the United States and, hopefully in a short space of time, China,” Mr Kenny added.

“As we know all too well, the task of building up an exemplary reputation can take years, but can be undone in a day.”

Mr Kenny also paid tribute to the IFA’s longstanding Brussels director Michael Treacy who was honoured at the IFA dinner on his retirement.

“ I think we can all agree here that Irish agriculture has benefited massively from your encyclopaedic knowledge of the European political and bureaucratic institutions,” he said.