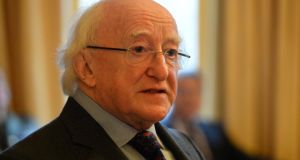 It is not often that you will hear a legendary singer such as Seán O’Sé light up a dull, overcast Milan morning with a live rendition of The Foggy Dew, but it happened on Tuesday when Ireland came to visit the Expo 2015 exhibition in Milan.

Accompanied by the Brú Ború band of Comhaltas Ceoltóirí fame, O’Sé was one of a number of Irish artists who welcomed President Michael D Higgins and his wife Sabina when they came to visit Expo on Tuesday on Irish National Day, time to coincide with Bloomsday.

In an age when hardly anyone knows what Expo is actually about, this Milan version may have hit on an irresistibly winning note. Entitled “Feeding the Planet, Energy for Life”, it has set out to investigate, illustrate and analyse just about every aspect of arguably the most urgent problem facing the world today.

The point was not lost on the President who said: “Global hunger in the 21st century represents the grossest of human rights violations, and the greatest ethical challenge facing the global community.

“According to the Food and Agricultural Organisation, while the world at the present time produces enough food to potentially feed its entire population, more than 1 billion people are undernourished, over 2 billion suffer from nutritional deficiencies, and almost 6 million children die every year from malnutrition or related diseases.”

The President also said that the fact that more than 140 countries are participating in this Expo means that the exhibition provides a “powerful infrastructure” which brings together the key issues of food provision, upscaling nutrition and sustainability.

Calling world hunger not only a “great ethical challenge” but also a “great moral outrage”, he added:

“Ireland knows about this, Ireland has an innate understanding of this [world hunger] . . . given that 1 million Irish people died of starvation and over 1 million emigrated during, ‘An Gort Mór’, the Great Hunger in the 1840s and [thus] food security is given the highest priority by our development aid programme . . .”

The President was formally received at Expo by Ivan Scalfarotto, Italian junior minister for constitutional reform. Mr Scalfarotto, Italy’s first openly gay government minister, took the opportunity to congratulate Ireland on its progressive “recent legislation”, in an obvious reference to the success of the same-sex marriage referendum last month in Ireland.

During his six-hour stay, the President also took time to visit the Irish pavilion, created around Bord Bia’s “Origin Green” programme which aims at promoting Ireland as “a world-leading producer of independently verified, sustainably produced food and drink while protecting a landscape rich in natural resources”.

And Bloomsday? Do not worry, it was not forgotten with actor Garvan McGrath at one point offering a spirited rendering of some excerpts from Ulysses, excerpts which he also offered in even more spirited Italian much to the bemusement of some of his audience.