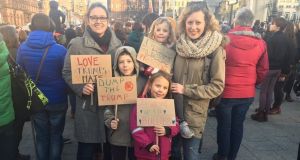 Hundreds of people gathered outside Belfast City Hall on Saturday for a ‘Sister Rally’ to highlight women’s rights and equality issues.

The demonstration in Belfast, part of a global day of action on Saturday, was organised by lecturer Jennie Carlsten (46) from Chicago, who, like others, was inspired by the ‘Women’s March’ on Washington in opposition to newly inaugurated US president Donald Trump.

“Today is a very emotional day,” she said. “I think there is an enormous challenge to human rights happening.

“Trump didn’t begin it, it wasn’t started and won’t end with Trump, but that rhetoric has been validated by the campaign over the last year and we see alarming things happening with policy already.”

Her six-year-old daughter Madeline said the rally organised by her mother was about “women’s rights, a bit about Donald Trump, a bit about Black Lives Matter and a bit about looking after the planet”.

Women, men and children held “Dump the Trump” and “I stand up to bullies” placards aloft and chanted “Women’s rights! Human rights!” at the Belfast demonstration.

Activists were calling for gender and racial equality and abortion rights among other issues of concern.

Megan Hoyt (37) from Canada said: “We are here to stand for human rights, women’s rights, equality for everyone, LGBT rights, people of colour’s rights, and we feel that Trump is trampling all over those.”

University researcher Sophie Long (30) from east Belfast said: “The radical idea that women are human beings comes late to Northern Ireland – but time is running out for those who stand in our way.

“Women’s rights are human rights and we will assert them in global solidarity.”

Rebecca Pettigrew (37), a researcher from Belfast, said it was important to bring her seven-year-old daughter Martha to the rally.

“I am showing Martha and our girls that we won’t take violation of women’s rights or anyone else’s rights,” she said. “I am concerned about how our rights are going to be implemented over here with Brexit and everything else.”

Sipho Sibanda (37), an asylum seeker from Zimbabwe, said she was compelled to address the rally to protest against Mr Trump and support other women.

“I just felt that women’s voices need to be heard,” she said. “All the comments that Trump said and all things he has done in the past against women, I just felt I needed to stand out as a woman and today is my chance.”