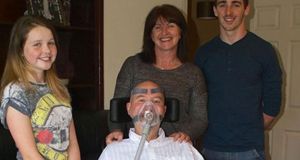 Andrew Lydon with his wife Sally and chilren Molly and Seosamh: The HSE has agreed to keep in him in hospital for three more weeks until supports are in place.

The Health Service Executive has reversed a decision that could have resulted in a man with motor neurone disease being forced to leave hospital just three days after an emergency operation.

Andrew Lydon (47), a Connemara-based computer programmer and father of two teenagers, is recovering in intensive care from a tracheotomy performed in University Hospital Galway on Saturday.

However, his family were told shortly before the operation that he would have to be taken home on Tuesday, even though there was no 24-hour care plan in place to support him.

Sinn Féin senator Trevor Ó Clochartaigh, a family friend, said that he welcomed the reversal but was shocked at the “unnecessary ordeal” Mr Lydon and his relatives had faced.

He was diagnosed with motor neurone disease more than five years ago. Now paralysed, he communicates using an eye gaze computer. “I can still feel the rain on my face, the sun on my back and the embrace of a loved one,” he has written.

Mr Lydon had been using a mask to help him breathe. Doctors in Galway performed a tracheotomy to make an incision in the windpipe. However, it requires continuous monitoring.

Ms Lydon says she was only told by the HSE a week before the operation that it had no care plan in place, after negotiations over 18 months on the issue. The family had set up a trust fund to co-finance the medical support with the HSE.

An email dated April 9th,2015, from an HSE West operational manager stated that “when 24-hour care is required, Galway Primary Community and Continuing Care have given a commitment to providing same”.

She said that the issue was raised in front of her children, which made it more upsetting.

Mr Ó Clochartaigh said that the HSE had left it to the “last minute” to revise its figure for the cost of aftercare to €700,000 stating that it “couldn’t afford it”. He questioned how such a figure could have been reached in the first place, but welcomed the outcome.