Analysis: Transfusion Positive criticised in report for ‘inappropriate’ use of funding 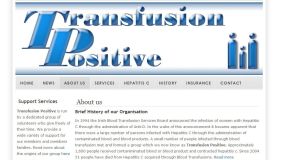 The treatment by the State of the hundreds of people who contracted Hepatitis C and other serious illnesses from contaminated blood products administered by public bodies was appalling.

However, it is also generally accepted that where significant levels of State funding is provided to voluntary organisations, appropriate controls over how this money is spent need to be put in place.

In relation to two organisations providing support services for people affected by the blood contamination scandal, which between them received about €6 million in State funding from 2009 to 2013-2014, serious questions have now been raised about expenditure of public money.

The funding in question is not the compensation paid out directly by the State to those who received contaminated blood products.

Rather what is at issue is the much smaller – but still considerable – amounts paid out in funding to the support organisations for patients and their families.

The Government has estimated that ultimately the bill arising from the tribunal established to provide compensation to those infected by contaminated blood products as well as their relatives could be in the region of €2.8 billion.

The organisations set up to support for those affected by the blood contamination scandals were Positive Action and Transfusion Positive.

In October 2014 a Health Service Executive internal audit made strong criticisms of breaches of corporate governance and inappropriate spending at Positive Action.

Nearly 18 months later a second internal audit has now in broad terms made many similar criticisms in relation to Transfusion Positive.

Transfusion Positive said yesterday there were no financial irregularities identified in the audit and that it was working with the HSE to implement the report’s findings.

It said all spending was for the benefit of members and their families.

The report maintains Transfusion Positive told auditors in relation to international conferences that these had patient-related sessions and breakfast meetings that were pertinent to its members.

However, it is clear from the tone of the audit report that the HSE internal auditors did not believe that much of the spending by Transfusion Positive during the years under scrutiny represented good value for public money.

The HSE said all but two of the auditors’ recommendations had now been implemented by Transfusion Positive and that the remainder were up for discussion at its annual general meeting in April.