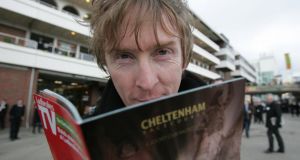 The 2FM breakfast presenter Hector Ó hEochagáin is to quit the station this week.

Ó hEochagáin took over as presenter of the morning slot in the shake-up that followed the death of Gerry Ryan in 2010.

No explanation was given for the decision. Ó hEochagáin promised to explain the reasons for his decision tomorrow morning in his show which broadcasts from 7am to 9am from Galway.

He tweeted: “To All The Soldiers Of The Dawn .... Exciting times ahead but

Ó hEochagáin’s stand in presenter Alan Swan will take over until the New Year where a new host will be found for the show.

The breakfast show is broadcast from Galway every morning, but will be returning to Dublin in the New Year.

Dan Healy, who took over as head of 2FM in April, thanked him “for the enormous effort it takes to broadcast a breakfast show and for the entertainment he gave to his ‘soldiers of the dawn’.”

He added: “Hector is a major personality and hugely loved by Irish audiences and has played a significant role in developing breakfast radio with his show ‘Breakfast with Hector’ on 2FM. ‘Keep Her Lit’ helped take the country through the past three years of the recession with outside broadcasts from Friday factory floor fillers to second chance debs.”

A RTÉ radio spokeswoman said Ó hEochagáin will return to RTÉ screens in the spring in the second of his series ‘Hector Goes’ and will also pursue other development projects with RTÉ Television in 2014.

Mr Healy denied last month that Ó hEochagáin’s show was for the axe in a long-heralded revamp of the station which has yet to fill the void left by Ryan’s death.

In the last JNLR results in October he was shown to have 124,000 morning listeners, similar to the previous book in July.

2FM has been making strides in the weekend radio market but has acknowledged the need for a shake up in its weekday output.