President Michael D Higgins was among the many spectators as the annual St Patrick's Day parade passed through Dublin, the theme this year was 'future'. Video: Alan Betson 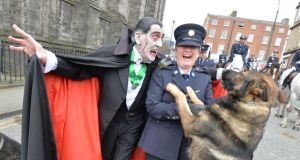 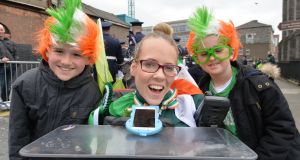 More half a million people lined the streets of Dublin to celebrate the St Patrick’s Day Festival which was themed “imagine if . . .” as a celebration of the future.

The festival was the final instalment of a three-year creative thematic series celebrating the past, the present and the future. This year looked at the future of the Republic as seen through the imaginations of young people.

Close to 3,000 performers participated in the parade. Cork native and disability rights campaigner Joanne O’Riordan held the honorary position of Grand Marshal. She said afterwards it was “an absolutely amazing day” and an experience she would “never forget”.

Ms O’Riordan received a standing ovation from President Michael D Higgins and his wife Sabina as she passed the grandstand near the start of the parade route at Parnell Square.

Bands from the USA, the UK, Brittany and Ireland provided the music for the parade as it travelled past some of the most famous and historic landmarks of Dublin. Ten US marching bands were welcomed from nine different States. 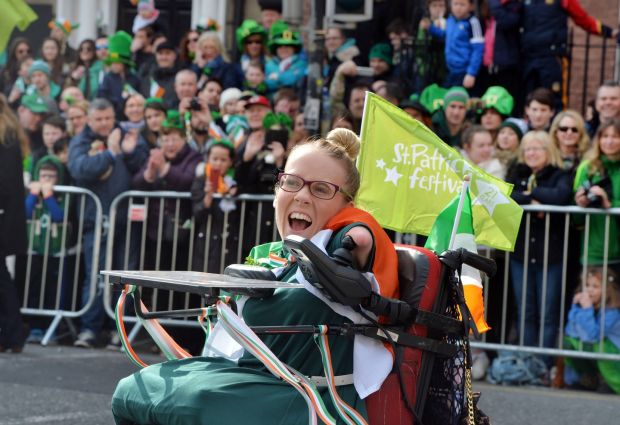 There was a big cheer from the crowd for the Berkeley Police and Fire Departments who arrived from California to march in memory of the victims and survivors of the Berkeley balcony collapse last year.

In what was a first for the festival, it adopted a theme tune. Award-winning Dublin song-writer Pete St John composed the celebratory tune March to Dublin. It was described by a spokesman for the festival as “a declaration of the welcoming spirit” towards visitors.

“It is an all-inclusive invitation to embrace and enjoy the history and culture of our city on the banks of the magnificent River Liffey,” he added.

The festivities were the start of four days of events and street theatre which will take place around Dublin over the next few days.

St Patrick’s Festival chief executive Susan Kirby said the parade had been a “huge success” and that it was watched by “millions the world over”.

“Every year we continue to be impressed by the vision of artists seen through their parade creations and performances, and this year is no different,” she said.

“The festival parade is a true testament to the artistic talent we have here in Ireland, talent that is showcased on a global stage today as the parade is viewed by millions the world over. Many thanks to all of those who came along to enjoy the day and we hope many more will enjoy the full programme of events the festival has over the coming days.”

A spokesman for the Garda said there had been no major incidents in the city during the parade.

“I’m sure there were minor bits and bobs, but nothing major,” he said.