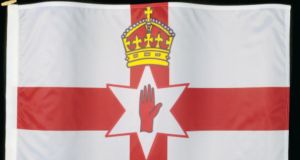 US diplomat Dr Richard Haass has proposed replacing the Northern Ireland falg (above) with an image acceptable to both communities.

An all-embracing body that would deal with Troubles-relating killings is one of the main suggestions contained in a paper presented to the five main Northern parties in Belfast today.

The draft proposals of some 40 pages deal with various ideas on how to tackle the issues of the past, parades and flags.

It was compiled by US diplomat Dr Richard Haass and the vice-chair of the talks, Harvard professor Meghan O’Sullivan.

Other ideas in the paper include a new flag for Northern Ireland that would be acceptable to both communities and the potential for limited immunity in return for truth telling by those who committed Troubles-related killings and other crimes, sources said today.

One of the main proposals that Dr Haass has presented in his document is the creation of a central organisation to deal with Troubles killings. Currently such investigations fall within the remit of the Historical Enquiries Team (HET), the PSNI and the Police Ombudsman.

But under Dr Haass’s proposal this new umbrella body would replace the HET and handle all past killings, sources said today. It would also free up the PSNI and the office of Police Ombudman to concentrate on the present rather than on the past, the sources added.

Sources said that the idea of limited immunity for people who committed Troubles-related killings in return for victims and survivors being offered the truth from perpetrators is implicit rather than explicit in the draft proposal paper.

She made clear however that if the Haass talks devised an acceptable alternative that the commission would be quickly disbanded.

Discussions over parades and the past have been difficult although it has been clear that there is room to make progress in these two areas. Flags however have been proving particularly resistant to compromise.

Ulster Unionist Party leader Mike Nesbitt said today that the “thorniest” issue was flags. Dr Haass has asked the five parties to consider adopting a new flag for Northern Ireland that would have cross-community support.

Sources said the idea triggered “heated exchanges” between unionist negotiators and Dr Haass last week with unionists declaring that they would accept no replacement for the British union flag.

Sources said today however that the idea of new generally acceptable Northern Ireland flag and/or emblem was not designed to replace the union flag but to augment it.

The DUP, Sinn Fein, the SDLP, the Ulster Unionist Party and Alliance were today invited to the Stormont Hotel in east Belfast to be given sight of proposals on the way forward.

The parties were not allowed to take away copies of the paper. And in an effort to maintain confidentiality participants to the talks were also banned from taking into the viewing rooms mobile phones, tablets or other electronic devices that could be used to copy the document.

The paper was scripted by Dr Haass and Dr O’Sullivan and is based on the cut-and-thrust of the negotiations that have been running since the autumn.

Dr Haass is in London today where he is briefing the Northern Secretary Ms Villiers and senior officials on the contents of his paper. He briefed the Taoiseach Enda Kenny and the Tanaiste Eamon Gilmore in Dublin last week.

Dr Haass is scheduled to hold bilateral meetings with the five parties tomorrow to hear and assess their responses, as he and Dr O’Sullivan attempt to strike a Christmas deal on what are longstanding and intractable problems in Northern Ireland.

Intensive round table talks involving the five parties and chaired by Dr Haass and Dr O’Sullivan are expected to be held on Wednesday. Talks sources said they expected there will be significant changes to the Haass paper in the coming days.