Government to spend €3 billion on hospitals and health projects 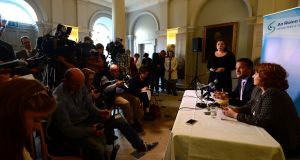 Minister for Health Leo Varadkar and Minister of State for Primary Care and Social Care Kathleen Lynch at a briefing on health projects in the capital plan at the Rotunda Hospital, Dublin. Photograph: Dara Mac Dónaill / The Irish Times

The Government is to spend more than €3 billion over the next six years on building new hospitals, developing community nursing units for older people and constructing primary care centres under its new capital programme.

Minster for Health Leo Varadkar said the new funding meant that, subject to planning permission, work would begin within the next year on four new national hospitals.

He said the new capital funding would permit work to progress on other programmes such as the national radiation oncology project with developments in Cork, Galway and Beaumont, up to an additional 80 primary care centres all over the country, and the replacement of community nursing units and disability accommodation.

The Minister said there would also be a major investment in information technology across the health service.

He said the Limerick maternity hospital would also be co-located on the University of Limerick Hospital campus.

Mr Varadkar said it was expected work on the new children’s hospital, the rehabilitation hospital, the national maternity hospital and the forensic mental health service campus would get under way next year and for it to be completed before the expiry of the capital plan in 2021. He also said construction of the new maternity centre at the Connolly Hospital site in Blanchardstown – to replace the Rotunda – and the maternity unit in Limerick would get under way in this period.

Minister of State at the Department of Health Kathleen Lynch said two of the hospital projects, the national rehabilitation hospital and the forensic mental health service campus had planning permission.

Mr Varadkar said he was confident planning permission for the new national maternity hospital at St Vincent’s could be sought by the end of the year. Work had been put on hold earlier this year after a dispute emerged between St Vincent’s and the existing National Maternity Hospital and the HSE over management and governance issues.

Ms Lynch said there were facilities in relation to older people that would need to be replaced while many others would need reconfiguration.

She said the additional money in the plan would allow for much of that work.

She said new forensic mental health units would be established outside Dublin for the first time. She said a lot of parents and friends of patients in the Central Mental Hospital were anxious they could be treated and cared for nearer their own homes.

Mr Varadkar said a lot of the country’s healthcare infrastructure was very old.

He said 200 years of infrastructure could not be replaced in six years but the new capital plan would allow for a very good start to be made.