Give me a crash course in... Junior Cycle reform

Schools are being briefed on preposed reforms but the teachers’ unions haven’t given their consent. How will that work? 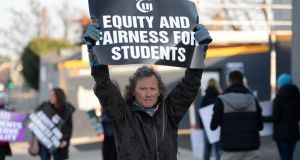 What happened this week? Minister for Education Jan O’Sullivan began briefing school management bodies on how she intends to implement junior-cycle reforms without the agreement of teachers. An information meeting involving other stakeholders, including parents and students’ representatives, is planned for later this month.

How is she going to do it without the teachers’ consent? With difficulty. The two unions representing secondary teachers, the ASTI and the TUI, have ordered their members to refuse to participate in preparatory work, teacher training or the roll-out of new short courses in, for example, computer coding. English teachers have been using the new subject framework since last September, however. Science is next in line in a planned subject-by-subject roll-out of the programme.

Why are the unions objecting? They have expressed strong opposition to the notion of school-based assessment, which is a central part of the plan. This would see teachers assess their own students in project work, communication skills and creative or critical thinking – all the sorts of attributes that can’t be captured in an exam setting. Teachers say they are in favour of the reforms but argue that the current system has an integrity and objectivity that will now be destroyed.

Is that it? No. Lots of other grievances are bubbling under the surface. Dr Pauric Travers, who has chaired marathon talks between the Minister’s officials and the unions, alluded to this when he said that “a decade of rapid social, demographic and educational change . . . have left many teachers alienated and distrustful, even of initiatives which may be to their professional benefit”.

So are the unions just letting off steam? There is an element of that. But the unions are also in some turmoil. A number of teachers and principals have come out in favour of the reforms, but some union officers are pushing for a tougher stance against the Minister, including the threat of more strike action.

What do most teachers want? The union executives have decided against putting Travers’s compromise plan to ballot, so we don’t know for certain. Undoubtedly,there is strong resistance to school-based assessment, but that could evaporate if union officials got behind the plan.

Is there any chance of that? Not much in the short run. The unions are heading into conference season, and officials will be keen to talk tough to their members. Traditionally there has not been much tolerance of dissent in either the ASTI or the TUI. Any member who openly criticises core policy is usually ostracised.

Are parents on their side? Teachers always feature high on lists of professions trusted by the public (unlike journalists, it must be said), and there would be general wariness of shifting towards a system where teachers might reward “favourites” in class. The National Parents’ Council, which enthusiastically backs the reforms, admits that there is a selling job to be done around them. It has held a number of meetings with parents’ groups to inform them of what’s involved, highlighting the in-built safeguards. These include a system of “external moderation” aimed at ensuring consistency in assessments. The council is also encouraging parents to concentrate on the greater prize for the education system.

Which is what? To finally take some of the focus off rote learning and “teaching to the test”. It has long been recognised that the obsession with exam results – As, Bs and Cs – is detrimental to our children’s education. Reforming the junior cycle means fighting against a mindset that is deeply ingrained in parents and teachers. More than 20 years ago this revolution was promised with the replacement of the Inter Cert with the Junior Cert, but lack of leadership turned it into a mere rebranding. Teachers hold the key to the success of the reforms. It’s now a straight choice: do they want to sabotage them incrementally or spark them into life?