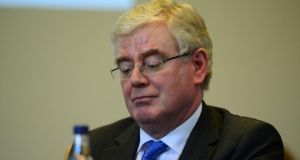 Eamon Gilmore made the announcement at the 13th annual NGO Forum on Human Rights, which is taking in Dublin Castle today.

Minister for Foreign Affairs Eamon Gilmore has initiated a complete review of Ireland’s foreign policy and external relations - the first such audit to be carried out in nearly two decades.

Mr Gilmore said he wanted to ensure the State produced “the right mix of policies and instruments with which to engage as a responsible global actor and to protect the values and interests of our people”.

His department will shortly launch a consultation process as part of the review, inviting input from members of the public, and other stakeholders with an interest in Ireland’s foreign policy.

Mr Gilmore made the announcement at the 13th annual NGO Forum on Human Rights, which is taking in Dublin Castle today.

The topic of this year’s forum was Ideals and Interests: the place of human rights in foreign policy”.

The Minister said the conduct of international politics was being undertaken in the context of new and significant challenges, including climate change, development cooperation, and the revolutionary wave of protest and change constituting the Arab Spring.

“It is easy at times to be pessimistic about the place of human rights in foreign policy,” he told delegates. “Yet, both in policy and in the day-to-day interaction between States, human rights issues are constantly on the agenda.”

“Through the work of international organisations, the media and civil society, there is a remarkable degree of international scrutiny of States’ implementation of their human rights obligations.”

However, Mr Gilmore admitted the integrity of the international human rights system was under threat as a result of reprisals against individuals or groups who seek to co-operate with or who have co-operated with the United Nations.

A central question for the forum, he said, was how to maintain a focus on human rights in “the real-time realities of the global market place”.

“Our belief is that values, economic dynamism and development are not incompatible,” Mr Gilmore said.

Prior to his address, there was a lively panel debate on the compatibility of human rights ideals with politicdal and economic interests, chaired by Patricia O’Brien, the permanent representative of Ireland to the United Nations.

US permanent representative to the Organisation for Security and Co-operation in Europe, Ambassador Daniel Baer, admitted the “short-termism” of governments and corporations often clashed with more long-term strategies around human rights.

Dr Stephen Humphreys, associate professor of international law at the London School of Economics, said it was easy to talk about human rights as being in our long-term interests but “what we constantly see, in practice, is the pursuit of short-term interests” often for private, economic interests often with “destabilising” consequences.

Dr Humphreys questioned whether US drone strikes made the world safer place. “If we keep trumping long-term public interest with short-term interest, we have to ask the question, is it because trade and economic interests have somehow taken the place of what we used to consider the public interest?”

Ms O’Brien the debate demonstrated that “complex relationships between ideals and interests” can be managed.

June Ray, chief of the civil society unit in the office of United Nations High Commissioner of Human Rights spoke of the problems of maternal mortality and gender-based violence, and how they had, in recent years, acquired “more visible profiles” as human rights issues in recent years.

However, she said female human rights defenders were much more subjected smear campaigns and defamation because they are women.