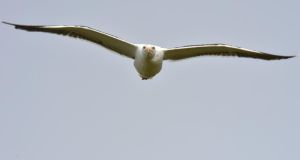 And in one dramatic attack, a motor cyclist on the road between Waterville and Cahersiveen was swooped on in an attack he compared to a second World War Stuka dive bomb, so expertly was the attack executed with the gull protecting his wings.

Part-time mountain sheep farmer, and rural development officer John McCrohan himself witnessed the deaths of two mature ewes in an attack by a number of gulls on his farm between Camp and Anascaul.

Mr McCrohan, brandishing a stick, barely fought off the gulls. However both ewes died. These were mature ewes, not yet shorn, yet the gulls managed to savage them through their thick coat of wool. The gulls used not just their beaks, but their claws also in the unprecedented attack.

Even when he intervened the gulls waited a short distance away

“I am convinced if I didn’t have that stick, they might have attacked me,” the farmer said on Radio Kerry on Wednesday morning.

He has called for a cull on the gulls which are encroaching further and further inland from the coast. They are commonplace in mountainous areas now – yet only in storm conditions would they have been seen inland previously.

Bridget O’Connor, a sheep farmer near Camp outside Tralee, recounted the same experience, last year. Generations of farmers had farmed the land but had never seen gulls.

Last March two lambs were attacked and Ms O’Connor, who witnessed the episode at around 6am, said the lambs were left in an awful state with their entrails torn out by the gulls.

They had been “gored to death”.

Then in Iveragh, Vincent Appleby was on his motorcycle with his helmet on travelling at around 40 km/h when a large gull nearly knocked him off his vehicle.

“He nearly knocked my head off – it was like a Second World War Stuka coming in – he knew what he was doing, he turned at the last minute so his wings wouldn’t hit.”