‘He brought life, love, intelligence, wit and strength to our family through its darkest hours’ 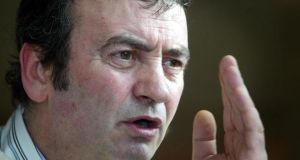 The family of Gerry Conlon has issued a statement saying his ordeal “changed the course of history”.

The family released the statement through Mr Conlon’s solicitor Gareth Peirce, who represented the Guildford Four and Maguire Seven throughout their attempts to get a miscarriage of justice reversed.

Mr Conlon died in Belfast today after a long battle with cancer at the age of 60.

“He brought life, love, intelligence, wit and strength to our family through its darkest hours. He helped us to survive what we were not meant to survive,” the family statement said.

“We recognise that what he achieved by fighting for justice for us had a far, far greater importance - it forced the world’s closed eyes to be opened to injustice; it forced unimaginable wickedness to be acknowledged; we believe it changed the course of history.

“We thank him for his life and we thank all his many friends for their love.”

SDLP MLA Alex Attwood described Mr Conlon as a “big character” who made a lasting impression on all those he met.

“He had a great resilience, an incredible warmth and a huge heart,” Mr Attwood said. ‘He also had a deep commitment to justice and democracy. He stood with all those who had been denied their rights and suffered wrong. The miscarriage of justice perpetrated against him, his Dad and his friends was shocking. The campaign of Gerry and others concentrated a spotlight on the wrongs of the State like never before.

“His eventual release was very significant in itself, was also a catalyst for campaigns against other miscarriages of justice.”

Sinn Féin president Gerry Adams said the jailing of Mr Adams and his father Giuseppe were “two of the most infamous examples of miscarriages of justice by the British political and judicial system”.

Labour MP Jeremy Corbyn tweeted: “Sad at death of Guildford IV Gerry Conlon; lost years of his life in prison, as did his Dad, freed after years then devoted life to justice.”