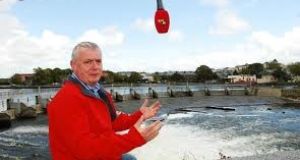 Mr Finnegan said he was very honoured to have been asked to be guest of honour at this year’s event on March 12th.