From Fireman Sam to chemotherapy, Charlie gets a short but sweet Christmas break 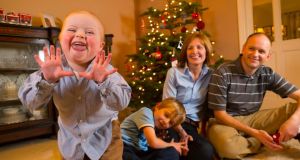 By some benign coincidence, and barring mishap, over the next few days Charlie Scully will get to enjoy his own version of the Christmas lull.

At his home in Co Waterford Charlie will have a pretty routine Christmas, with a lot of Fireman Sam presents, and his family around him. Then on Friday, December 27th, it’s back to business as usual, when Charlie makes his fortnightly visit to Dublin for his chemotherapy.

“It’s just the page we’re on, the chemotherapy is not as intense as the induction phase or the consolidation phase,” says Charlie’s mother, Imelda Scully. “We’re on what they call in-term maintenance at the moment, which is a softer phase, and it’s just fallen at Christmas.”

On September 19th Charlie, who will be four in February, was diagnosed with acute lymphoblastic leukaemia.

Charlie’s progress through our maligned medical system was rapid. “Nothing but the royal treatment,”

She cannot praise the staff at Waterford Regional Hospital in Ardkeen highly enough. “The nurses are wonderful, although they’re short-staffed. You can see they’re under terrible pressure.”

As Imelda talks, in the big kitchen of the Scullys’ Waterford home, the bottle of the chemotherapy liquid, which she gives Charlie daily, stands on the island unit. Charlie is watching Fireman Sam cartoons, and then Curious George cartoons. “Thank God for Sky Plus,” says Imelda.

On the Monday she brought Charlie to their local GP; on the Friday Charlie started chemotherapy at Crumlin children’s hospital. “Talk about waking up with a crowd around you,” says Imelda of her experience on St John’s ward, as the medical team gathered at Charlie’s bed.

Now Charlie is reading the newspaper, licking his finger with adult authority as he turns each page. Imelda points out that he is licking the finger on one hand, but actually turning the pages of the newspaper with the other.

Charlie identifies Santa in the newspaper. “Ho, ho, ho,” he says, with his hand to his chin to denote a beard. Charlie uses sign language a lot. “He recognises Santa but he’s terrified of Santa,” says Imelda.

“It was very frightening,” she says of his diagnosis. “But I feel I didn’t get it in one blow.”

She is sustained by Charlie’s cheerfulness and charm, as well as the support she has experienced. “A group of about six women take it in turns to bring Charlie and me up to Crumlin. It’s an early start. We have to be there for half seven, so my friends get up at five. My brother-in-law will drive us this Friday. Charlie usually wakes up at Newland’s Cross. It’s the fasting that’s the hard part.”

Charlie fasts because every second Friday he is given a general anaesthetic so the chemotherapy drug methotrexate can be given to him via spinal puncture.

According to Prof Smith, Down syndrome children are “exquisitely sensitive” to methotrexate. Their systems find chemotherapy more toxic than other people’s do, and the doctors had to learn how to tailor treatment to their needs. Imelda says Charlie “wakes up smiling and has his breakfast”. He greets Prof Smith by bumping knuckles with him, in the “respect” gesture. He leaves Crumlin blowing kisses to the nurses.

“Charlie doesn’t cry unless he’s really upset,”says Imelda. “He never did.” Only once, when the mouth ulcers and the nappy rash that were brought on by chemotherapy became severe, did Charlie cry.

“He did stop walking for a little bit,” says Imelda. “It affects their ankles. He was seen by the physiotherapist in Ardkeen.”

Charlie’s energy fluctuates with the cycle of his treatment; the steroids exhaust him. “Last week he was up at eight and then asleep on the couch there again at 10.”

When Charlie’s hair fell out, “he’d just look at a big lump of it in his hand and he’d laugh at it and throw it on the floor”.

For his family, of course, things are different, “although Jim is very calming”, says Imelda of her husband.

She is a beautiful woman in her mid-40s. “We’re just getting on with it, taking one day at a time,” she says.

Charlie’s older brother Tom (7) was very upset by the news of his illness. Tom worried that people would laugh at Charlie when he lost his hair. He offered Charlie his Manchester City cap for the duration.

When Imelda was pregnant with Charlie she went for a blood test to check for Down syndrome, “and it came back okay. But sure, look, these things happen. I wouldn’t change Charlie.”

The only thing she has “a bit of anger around”, she says, is that it’s enough for a child to have Down syndrome – “that should have been his lot” – without suffering leukaemia as well.

As it is, the Scullys are buoyed by the survival rate for Down children with leukaemia, which stands at more than 80 per cent. On January 17th, Charlie will begin a new phase of chemotherapy described as “delayed intensified”. As Imelda says, “even those two words don’t sound very nice”.

On Christmas Day “he’ll be running around”, says Imelda. “But if he gets a temperature we’ll be in Ardkeen.” Please mention Fiona, the clinical nurse in Crumlin, says Imelda. “Fiona is my lifeline up there.”

Charlie blows a lot of kisses, tirelessly, until the front door closes.