Fresh hope in North for political agreement within weeks

Deal on paramilitarism, welfare reform, budgets and the past ‘is achievable’ 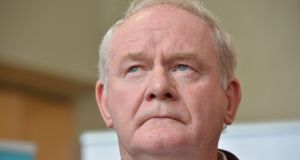 Deputy First Minister Martin McGuinness: I think with goodwill on all sides it is achievable. Photograph: Alan Betson / The Irish Times

There is a “growing sense of hope” that a comprehensive deal covering issues such as paramilitarism and welfare reform could be agreed in the next two weeks, according to senior Stormont talks sources.

Sinn Féin Deputy First Minister Martin McGuinness said yesterday a political deal is “achievable” and the timeframe for agreement was days rather than weeks.

As all-party talks continue at Stormont House today Mr McGuinness said the negotiations were beginning to intensify. The talks have been running for almost six weeks, concentrating on paramilitarism, welfare reform, budgets for the Northern Executive, and how to address the legacy of the Troubles.

“Is a deal achievable? I think with goodwill on all sides it is achievable. . .I do think we are talking more about days rather than weeks,” he said.

Senior talks sources last night took issue with the prospect of a deal being concluded in a matter of days but nonetheless there was a fairly wide consensus that significant progress has been made and a more confident mood in Dublin and London that a deal could be done.

One senior source said a deal was possible by sometime next week but he believed more realistically the talks, at least, would stretch into the following week. “I think there is a growing sense of hope that a deal will be done in the next couple of weeks but equally we can’t underestimate the gaps that still have to be closed to get there,” he added.

While the source warned that “it could all yet break down on the contentious issues” he and other talks insiders added that “substantive” work is being carried out on the “crux issues” of the continuing existence of paramilitaries including the IRA, on welfare and on the past.

Another source said there was a “new energy and focus” to the talks which are being overseen by the Northern Secretary Theresa Villiers and Minister for Foreign Affairs Charlie Flanagan. He said while there isn’t a draft “blueprint” of an agreement in place that “when things move that all could happen quite quickly”.

Any agreement would bolster the Stormont House Agreement of last Christmas which promised £2 billion in extra spending powers for the Executive. That agreement was suspended in the spring when Sinn Féin and the SDLP said they could not tolerate its welfare reform elements.

He also claimed that there had been attempts to “sabotage” the negotiations in recent weeks. He was also critical of some parties other than Sinn Féin and the DUP.

He said “the difficulty about recent times is that some parties can’t get out the door quick enough to say something which negatively feeds into what we’re trying to do”.