A plaque has been unveiled in Hulluch, northern France, to men killed in gas attack 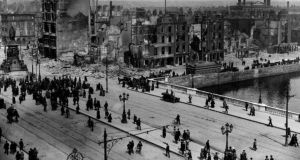 One victim died in France about the same time his wife Margaret was shot on the streets of Dublin at Easter Week 1916. Photograph: PA

The village of Hulluch in northern France has unveiled a plaque which remembers the 532 Irishmen who died there during Easter Week in 1916.

The men from the 16th (Irish) Division were killed when the Germans released chlorine gas into their lines between April 27th and 29th, 1916, at the same time as the Easter Rising was happening in Dublin.

One victim was Private John Naylor of the Royal Dublin Fusiliers, who died on April 29th. By a tragic coincidence his wife Margaret was shot on the streets of Dublin on the same day and died of her wounds three days later. The couple left three children.

A large crowd of French, Scottish and Irish visitors attended Saturday’s event. The 15th (Scottish) Division were also affected by the gas attack. Mayor of Hulluch André Kuchcinski said remembrance of the gas attacks was a “burning obligation”.