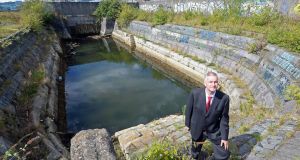 Three Georgian docks within Dublin’s Grand Canal Basin could be regenerated for theatre space, children’s recreation and marine repairs, according to a docklands business group.

The Grand Canal Basin in the heart of the capital could be “teeming with as much life and vibrancy as Dun Laoghaire is every weekend”, the Docklands Business Forum has said.

The forum, which aims to discuss its plan with Waterways Ireland today (FRI), believes that more “blue space” is imperative for the thousands of people now living and working in an area where Google and Facebook are major employers.

Cross-border agency Waterways Ireland is primarily responsible for the Grand Canal Basin and for the surrounding area where the three graving docks were constructed for vessel repair, while Nama also has a lease interest.

There have been fears among water users that Waterways Ireland wants to sell off the graving docks as a landbank for more office development.

The Docklands Business Forum says that as” important pieces of Dublin industrial and maritime heritage”, it would be “wholly inappropriate for the graving docks to be incorporated into an office or residential building”.

The forum’s plan notes that the Grand Canal Basin is currently “under-utilised” and could become a “world class luxury yachting destination, facilitating over 300 yachts at any one time”.

It notes that the European Commission has identified maritime tourism as a key growth area.

As part of this, the smallest and most intact Georgian graving dock, which was cleaned up voluntarily by Inland Waterways Association of Ireland (IWAI) members, could be used as a working dry dock for small vessels, it says.

It advocates using the middle dock as a children’s recreation area with a climbing wall, and for occasional dry docking of the Jeanie Johnston (italics) sailing ship.

It points out that Dublin Port will no longer have graving dock facilities for the Jeanie Johnston and other craft (italics) on the north side of the river as part of its Alexandra Basin development.

The business forum proposes that the largest dock, which has been filled in, should be excavated and used as an amphitheatre.

It also suggests development of a cycle way, a history trail, and it cites Les Berges de Seine in Paris and the Albert Dock in Liverpool as examples of successful maritime heritage projects.

“These proposals are compatible with what we understand to be Waterways Ireland’s preferred use of the area,”the forum’s chief executive Alan Robinson says.

Micheál Ó Cionna, who runs Dublin Discovered Boat Tours, says that the three Georgian structures are of “ingenious design”, being filled by water from the Grand Canal Basin and drained by water flowing into the nearby river Dodder at low tide.

“Our fear would be that planning may ultimately be granted to build on them, in the same manner that the medieval harbour in front of the Spanish Arch in Galway has been buried and “preserved” since Portmore was built there over 20 years ago,”Mr Ó Cionna says.

Waterways Ireland confirmed that it was “currently developing options” for the area known as city block 19, including the graving docks, to meet strategic development zone requirements.

“We have received considerable interest in the development of city block 19 from quite a number of interested parties, and look forward to assessing these proposals when the option appraisal has been completed,”it said in a statement in advance of today (FRI)’s meeting.