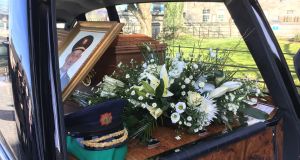 Former Garda Commissioner Larry Wren’s coffin with the Tricolour, his commissioner’s hat, his portrait and spray of flowers, at his funeral at St Brigid’s Church in Blanchardstown, Dublin. Photograph: Peter Murtagh

Former Garda commissioner Larry Wren was remembered at his funeral yesterday as a person of love and charity. He was and a man of integrity who lived a quiet life which latterly was devoted to his family and helping others.

About 400 people filled the church of St Brigid in Blanchardstown, where Mr Wren was a regular worshipper. Among the chief mourners was Maureen, his wife of 62 years, their daughters, Mary McConville and Anne Moran, their grandchildren, and a host of family friends and former professional colleagues.

Mr Wren, who died last week aged 94, was Garda commissioner from 1983 to 1987. His funeral Mass was a family farewell and a substantial formal Garda occasion. He was accorded the honour of a ceremonial party of uniform Garda pallbearers who carried his coffin, which was draped in the Tricolour and had his commissioner’s hat and gloves on top, into the church to the strains of Seán Ó Riada’s Ag Críost an Síol, played by Encore Occasions.

A colour party, bearing the national flag and the Garda flag, attended, presenting their standards at the altar. Three Garda buglers played Reveille twice during the service.

Mr Wren’s hallmark had been his integrity, the chief celebrant, Fr Dan Joe O’Mahony. said. “His leadership and his judgment were of the highest standard,” said Fr O’Mahony. He mentioned two difficult professional tasks that befell Mr Wren – the Tiede Herrema siege at Monasterevin and the visit to Drogheda of Pope John Paul II.

“He was a private man who led a very simple life . . . On Sunday mornings, he was at the church door collecting for St Vincent de Paul.”

The eulogy was given by one of Mr Wren’s grandsons. Tom Moran, who first sang You Raise Me Up, spoke of his grandfather’s “long and distinguished career in the Garda Síochána”, how he was the son of retired member of the Royal Irish Constabulary, and how his passing changed life forever for the family but that it was sustained by the expressions of praise for his life and support since his death.