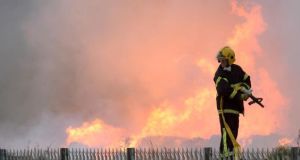 Four units of Dublin Fire Brigade are still fighting a fire at a waste recycling plant in Ballymount in Dublin.

Four units of Dublin Fire Brigade are still fighting a fire at a waste recycling plant in Ballymount in Dublin.

An incident command unit and senior officers are also at the scene and there is major traffic disruption in the area.

A spokesman for the fire brigade said there was no sign of the fire being brought under control as yet.

It broke out early on Saturday morning at Oxigen’s Ballymount Recycling Plant in Dublin 22.

The concrete and steel warehouse, which mainly contained waste from domestic green bin collections and from building and household skips, was destroyed in the blaze. Temperatures were so high at the height of the blaze that the walls and roof melted.Oxigen spokesman Martin Harrell said yesterday the company “recently ceased hazardous waste acceptance – all bar the asbestos”, though its website still advertises Ballymount as accepting hazardous waste.

Hazardous substance asbestos was among the materials stored at the recycling plant but it was removed before it could catch fire.

He said explosions heard from the plant were caused by argon and oxyacetylene tanks used for welding in the company’s maintenance garage and not from any other material.

Though fumes from the fire were detectable across the city yesterday, a spokeswoman for the Environmental Protection Agency said its air quality monitoring system was not showing anything of concern, but it was still advising those in the path of the smoke plume to stay indoors and keep their windows and doors closed. She said both air and water quality in the area would be closely monitored in the aftermath of the fire.

Details of the traffic restrictions are as follows:

- Ballymount Road is closed with only local access into Merrywell Industrial Esate.

- Access into Merrywell Industrial Estate from Turnpike Road only

- Local Access only on Ballymount Road for Panda, Galco, Kelkin Fastway, up turnpike road only.