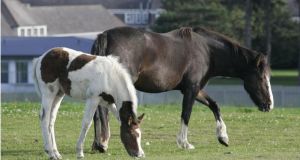 Only two plants in the Republic are now licensed to slaughter horses for the human food chain, compared with five about the time the horse meat crisis emerged. Photograph: Dara Mac Dónaill

The number of horses slaughtered at licensed abattoirs more than halved last year as a result of the horse meat scandal, new figures from the Department of Agriculture show.

This follows the introduction of stricter regulations surrounding the slaughter of horses for human consumption, as well as a reduction in the number of plants accepting horses.

There are now only two plants licensed to slaughter horses for the human food chain, compared with five about the time the horse meat crisis emerged.

Before the horse meat scandal, it was believed that controls relating to horse identification were not strictly enforced and some horses were slaughtered for export for human consumption without having clean passports to show they were free from potentially harmful medication such as bute.

A spokeswoman for the Department of Agriculture said controls had been strengthened in a number of ways. A new central equine database was being used to supplement checks carried out by department staff in slaughter plants. Meanwhile, some 4,000 horses were seized by local authorities for animal welfare reasons last year, an increase of more than 1,100 on 2012.

Knackeries
If an unwanted horse cannot be slaughtered on a factory line, owners can sent them to knackeries, or Category 2 plants, but they must pay in the region of €140- €200 to have the carcasses disposed of.

The Department of Agriculture spokeswoman said there had been “very substantial activity in the latter months of 2013 in the Dublin, Wicklow, Kildare and Cork regions where some 290 horses were removed from five sites.”

Last week it emerged some 50 horses were removed from one owner in Galway for welfare reasons. Highlighting the case, Reform Alliance Senator Fidelma Healy Eames said it showed the need for a solution to the problem of oversupply.