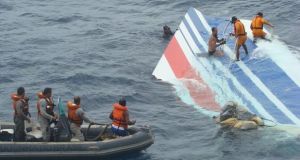 Salvage teams working to retrieve debris from the wreckage of Air France flight 447 off the coast of Brazil in 2009. Photograph: Forca Aerea Brasileira via Bloomberg News

The father of an Irish doctor who perished when an Air France transatlantic flight from Brazil crashed has said that the family will appeal a decision by French judges to drop charges against the airline and Airbus.

John Butler, father of Aisling Butler, one of three Irish women who were killed in the crash, told RTÉ radio’s News at One that he will be joining with other families in appealing the judgement.

On Thursday French judges dropped charges against Air France and Airbus over the crash in 2009 that killed all 228 people onboard, blaming the pilots for losing control of the plane.

In their conclusions, seen by Reuters, the judges said the pilots of the Airbus A330 had failed to process all the warnings and instrument readings provided by the aircraft.

The plane crashed en route from Rio de Janeiro to Paris after entering an aerodynamic stall and falling from an altitude of 38,000 feet during a storm, its engines running but its wings losing lift.

Disappointed but not surprised

Aisling Butler, of Roscrea, Co Tipperary, Jane Deasy from Dublin and Eithne Walls, originally from Belfast, were among the dead.

“The direct cause of the accident is the crew’s loss of control of the aircraft’s trajectory,” the judges determined.

A lawyer representing the families of victims said an appeal against the judges’ decision would be lodged immediately.

Mr Butler said that as a family they were very disappointed, but not really surprised at the decision. “We are very, very disappointed, it is 10 years hence, we never got the body of Aisling back and it’s one of those things that we’re living with every day.”

He added that he doesn’t understand the logic of the magistrates’ decision. “Everyone is responsible for what they do. Air France is the national airline of France and everyone was a paying passenger. Airbus are the manufacturer and supplier of the aircraft involved, so they are responsible.

“Yes, we will join an appeal by relatives, ‘tis too easy to lie back and do nothing. This organisation was put together to really remind Air France, remind Airbus and certainly remind Air France as to the way they train their pilots so that this never happens again.”

Of his daughter, he said: “The future was what she was thinking of all the time, she had a fantastic love of people, she just wanted to bring her medicine to her patients and to let them have the benefit of it.”