Claims that farmers could lose up to €175 million this year

Beef farmers from across the country joined IFA President Eddie Downey to protest ouside the Department of Agriculture about Minister Coveney's Food Harvest 2020 plan and the falling price of beef. Video: Bryan O'Brien 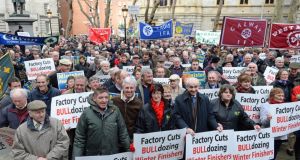 Some 3,000 IFA members gathered outside the Department of Agriculture on Dublin’s Kildare Street today to highlight their concerns about falling cattle prices at the factories.

Farmers came from as far as the Beara peninsula in Co Cork, Westport and Leitrim and carried banners claiming that the factory price cuts were “bulldozing” farmers.

Farmers who kept bull calves for fattening, instead of selling them for export earlier, have found themselves with no market in recent weeks, as retail specifications have changed and younger animals are in demand.

“Farmers feel very let down and feel the factories have reneged on their commitments,” he said. Prices of other animals are also significantly lower than this time last year and Mr Downey said the price of bullocks and steers were down by up to €80 per head.

Mr Downey said farmers could face losses of up to €175 million this year if beef prices are not restored by the meat factories. “Bull beef finishers are at their wits’ end, unable to get cattle killed,” he said.

“These farmers are facing very real and substantial financial losses.”

The protesters also marched to the gates of Leinster House to highlight their dissatisfaction with the Government’s handling of the crisis.

IFA, along with ICSA, ICMSA, ICOS and representatives from Ibec’s Meat Industry Ireland are now discussing the issue at the Oireachtas Joint Committee on Agriculture, Food and the Marine.