FAI hands out punishments for 12 alleged assaults on match officials 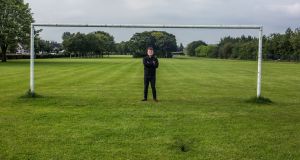 Harry McCann: giving up his role as a referee because of the abuse and violent threats he has received. Photograph: James Forde

The Football Association of Ireland has investigated 15 separate incidents of alleged assault on match officials since 2016.

The FAI confirmed on Monday it had handed down bans and other punishments in all but three of the incidents that had been reported to it.

The remaining three are still under investigation, with outcomes expected in the coming weeks.

The latest investigations are taking place under strengthened rules on behaviour towards match officials introduced by the FAI last November in the wake of a serious assault on referee Daniel Sweeney, who was hospitalised after being attacked in Co Offaly.

Three players were banned from the sport for 40 years following the assault, after which Mr Sweeney had to undergo five hours of surgery and have plates inserted in his jaw.

Paul O’Brien, the president of the Irish Soccer Referees’ Society, said there was an “epidemic” regarding poor treatment and assault of referees in the game, “and that’s not going to be wiped out immediately”.

However, he said the FAI had recently put reforms in place to address the issue.

“It is being dealt with properly, it went from two small parts within the FAI rulebook to three full pages. But putting something in black and white doesn’t immediately translate on the pitch. We want to see a cultural and attitude change towards referees,” he said.

The society had been training referees to deal with strenuous and difficult situations in recent months, he added.

It comes as the Kildare District Underage League (KDUL) confirmed that it had begun an investigation into an alleged threat made against a referee during a match last weekend.

Harry McCann announced on Twitter following the game that he was giving up his role as referee because of the abuse and violent threats he had received over the past four years. He also cited a loss of confidence in the FAI which seemed to have “no plan or strategy” to deal with abusive parents and managers.

Mr McCann told The Irish Times the incident occurred when a player received an accidental strike to the face from an opponent while going for a ball.

Following that, a man, who he believed to be associated with the opposing team, became abusive and threatening, he said.

Mr McCann said he asked the man to leave the field and when he continued being aggressive and abusive, he told him to leave the ground.

“Then he clenched a fist, took a step towards me and made a striking motion in my direction,” Mr McCann said. While agreeing that it was a mock punch, he said he believed it was an attempt to intimidate him.

A spokesman for the KDUL said the referee’s report was received by the league on Sunday night*, “and as is usual with allegations of this nature, will be subject to disciplinary investigation”.

The spokesman added: “We await the receipt of additional documentation from the referee required to investigate this matter further. The KDUL takes all allegations of this nature very seriously and will not be commenting on this specific matter any further.”

The FAI said it “condemns any threat of violence against a referee and will take action against anyone found guilty of any behaviour that threatens a referee, verbally or physically”.

Under FAI rules, an alleged assault must be reported to the association, which will investigate it.

However, this applies only when an assault, rather than a threat, is alleged to have occurred. A lesser charge of coercion may apply when a threat is involved.