Eyewitness: ‘Belfast’s flames could be seen on the English coast’ 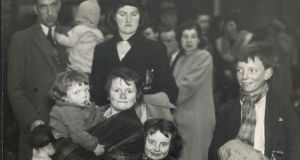 “Every rumour prompted flight. We would head off with other families to spend the night, wrapped in blankets, in the fields above Ballysillan, looking down over the lough”

If rosary beads were found on the dead, they were assumed to be Catholic. The unidentified were buried in mass graves at the Catholic Milltown Cemetery or the non-denominational Belfast City Cemetery.

In one night about 800 were killed and thousands injured. The hospitals were overwhelmed and the dead were stacked in public baths and marketplaces. Many could not be identified.

The wailing of sirens all over Belfast heralding the first bombing raid had come on April 7th. My father was away at the war, so my mother shepherded us into the tiny cubbyhole under the stairs of our terraced house in north Belfast.

No bombs fell nearby and damage was largely confined to east Belfast where the shipyard and aircraft factory were the obvious targets. Few people were killed.

The accepted wisdom was that it had been a one-off, a long-distance training exercise by the Luftwaffe.

Once again it was under the stairs for us. We could hear the heavy drone of the bombers as they flew up Belfast Lough loaded with high explosive and incendiary bombs.

The drone became louder as they rose higher before it turned into an eerie whine as they dived to drop their loads. Our house was shaken violently several times and some windows were blown out.

The wailing of the sirens sounded the all-clear after 4am. We emerged from our cramped haven. One hundred thousand people were already homeless. Belfast’s flames could be seen on the English coast.

We youngsters were on the streets early that morning. Corporation workmen cleared away rubble and boarded up broken windows. A house in the street behind us had received a direct hit and was demolished.

There were no signs of the occupants. We collected shrapnel from incendiary bombs, a grey putty-like substance. We piled it high and set it alight and it blazed away fiercely, a premature Twelfth bonfire.

There had been a belief in Protestant streets such as ours that Catholic districts would not be bombed as fascist Italy was on the side of Nazi Germany, and the pope and Adolf Hitler had made an agreement to protect the faithful.

The younger members of my family were sent to stay with an uncle on the Falls Road who had married a Catholic. As I walked there, even at my young age, I could not help wondering why houses and textile mills in the Catholic Ardoyne area had been flattened; the pope obviously had not as much clout as he thought.

Every rumour prompted flight. We would head off with other families to spend the night, wrapped in blankets, in the fields above Ballysillan, looking down over the lough.

From Ballysillan’s cold and bleak eyrie, we witnessed the next big Luftwaffe raid on Belfast on May 4th. More than 200 planes came in over the lough, wave after wave, illuminated by moonlight and the probing searchlights.

The shipyard and the aircraft factory were battered and it took six months to get them back into production. Another 150 people were killed and many more injured. A raid the following night killed 14 people.

The Stormont government ordained that all children were to be evacuated from the city. We were sent back to our native Fermanagh. The bombers never came again.