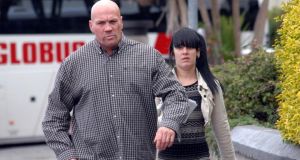 Billy Isaacs was found dead at his home at Dromreagh in Durrus this morning. Here he is photographed with girlfriend Siobhan Ginty at Bantry District Court last month. Picture: Niall Duffy

A former professional heavyweight boxer who was acquitted of the murder of a woman in the UK in a suspected gangland killing over a decade ago has been found dead at his home in West Cork.

Billy Isaac (45), a native of Manchester, was found dead at his home at Dromreagh in Durrus around 11.30am today by gardaí who called to the house after they were contacted by a workman who was unable to make contact with Mr Isaac.

Mr Isaac was found dead in a downstairs room and gardai believe he was fatally injured when he fell while trying to climb in through a downstairs window. His body was removed to Cork University Hospital for a post-mortem today but gardai don’t suspect foul play at this stage.

Last month, Mr Isaac was convicted and sentenced to five months in jail by Judge James McNulty at Bantry District Court after he pleaded guilty to assaulting waitress, Lucie Kopecka at the Gateway Restaurant in Durrus on April 7th last.

Mr Isaac’s fiancée, Siobhan Ginty (23) was also convicted of assaulting Ms Kopecka on the same occasion and sentenced to four months in jail by Judge McNulty but both were released on bail pending a circuit court appeal.

Ms Ginty, who is also from Manchester, had returned to the UK in the past few days for a family event and Mr Isaac was alone in the house when the accident happened. He had been last seen alive in the Durrus area on Monday evening.

During his trial at Bantry District Court, Mr Isaac confirmed that he had three convictions for assault as well as one for possession of ammunition and one for harassment in the UK where he lived up until his move to Ireland a few years ago.

Mr Issac, who boxed as a heavyweight in the UK in the early 1990s, winning his two professional fights, was acquitted in 1995 of the murder of businesswoman Pat Hayes who was shot twice in the head as she slept at her home in Denton near Manchester.

A security firm boss at the time, Mr Isaac was accused of carrying out the killing on the orders of his mother Rita who stood to inherit Ms Hayes’s bungalow and several properties they owned together in Florida but both he and his mother were acquitted of the killing.

In 2010, Mr Issac was cleared of charges of trying to extort £2.5 million stg from a businessman in the North East of England with former world champion boxer, Ricky Hatton testifying on his behalf, saying Mr Issac was “a credit to the sport”.

Gardaí in West Cork last night said that they would await the results of Mr Isaac’s post-mortem to include in a file on his death for an inquest to be held at the Coroners Court in West Cork.