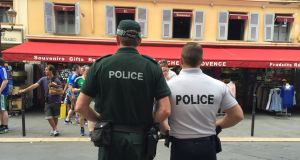 A Police Service of Northen Ireland officer with a gendarmerie in Nice, France. There was some minor overnight trouble in the city involving a small number of Northern Ireland fans ahead of the Group C game between the North and Poland at the Stade de Nice on Sunday evening. Photograph: Michael McHugh/PA Wire.

There was some minor overnight trouble in Nice involving a small number of Northern Ireland fans ahead of the Group C game between the North and Poland at the Stade de Nice on Sunday evening.

One Northern Ireland fan was arrested and five other fans and one Polish supporter were taken to hospital to be treated for minor injuries. A number of local French supporters who police said instigated the trouble also were arrested, it is understood.

PSNI Supt Nigel Goddard said that French troublemakers were responsible for the minor clash that briefly flared in the centre of Nice close to the fanzone on Saturday night. The incident happened at the Place Massena.

“The Poles and Northern Irish were getting on exceptionally well, and that needs to be made clear. The trouble last night was not the slightest bit between Northern Irish and Polish supporters,” he told The Irish Times.

“What happened was a group of local football ultras, or football hooligans, about 20 or 30 of them, infiltrated the street area where Northern Irish and Polish supporters were having a great time,” explained Supt Goddard.

He said the French supporters made out “they were wanting to join in the fun but quite soon it became obvious that they were provoking for a fight”.

“The actual incident was tiny instigated by the 30 or so locals,” he added. It was quite intense but the incident was short in duration.

It is understood that those brought to hospital had minor injuries such as cuts and bruising. It was expected that the Northern Ireland fan who was arrested will be released later today without charge.

Supt Goddard said the French police highly competent in dealing with the trouble and in “de-escalating the situation”.