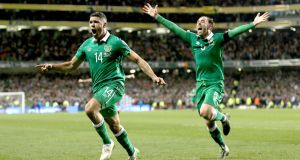 Jonathan Walters celebrates scoring his second goal in the playoff against Bosnia which secured Euro 2016 qualification for the Republic of Ireland. An Irish MEP has criticised UEFA for making an unacceptably small number of tickets available to Republic of Ireland fans for this summer’s European Championships. Photograph: Donall Farmer/Inpho.

An Irish MEP has criticised UEFA for making an unacceptably small number of tickets available to Republic of Ireland fans for this summer’s European Championships.

Uefa this week confirmed it had received more than 275,000 applications for the three games involving the Republic at the finals in France this summer, with the vast majority of applicants set to miss out when tickets are allocated next month.

The FAI has said its intention is to “endeavour to reward the most loyal supporters” and various other members of the “football family” when it begins the process of how to allocate tickets.

Mr Kelly said it was “unacceptable that such a miniscule allocation of tickets” had been given to “the actual supporters of the teams”.

“We now have a situation in which the loyal Irish fans will not be able to get tickets for these crucial games having spent their hard earned money following our team around the globe for years,” he said.

“We know from the tournaments of the past in Germany, Italy, USA, Korea - Japan, Poland - Ukraine that Irish supporters will travel with or without tickets”.

The FAI’s system has attracted some criticism from those who feel that it allocates too few tickets to supporters with an established track record of going to see the team, especially away from home, and there is likely to be renewed controversy when the distribution is completed.

Uefa, which has warned those who have applied for tickets to ensure that they have sufficient funds on the card they have used to complete the process during the weeks ahead, say they will have informed all successful applicants by Monday, February 29th.

Mr Kelly said Uefa should revise the allocations in advance of the deadline which he said was an “easy and fair” solution.

“I hope that a solution is found to this issue - our fans promote Ireland around the world and my colleagues in Parliament regularly me that the Irish fans are the best fans in the world. It is important they have the chance to support the team.”

Number of people homeless rises sharply to top 10,270 20:27
Orange weather alert issued as Storm Jorge set to batter Ireland 20:24
Coronavirus: One case confirmed in Northern Ireland 20:03
What should you do if you think you might have coronavirus? 19:58
Predictions of ‘skin and hair flying’ as FG selects 13 of up to 60 Seanad hopefuls 19:14