Enda Kenny says his duty now is a stable government

An Taoiseach Enda Kenny concedes that the Fine Gael and Labour coalition will not be returned to government. Video: RTÉ 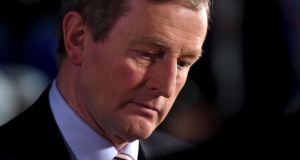 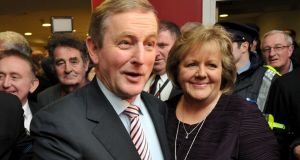 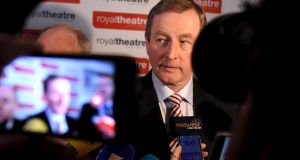 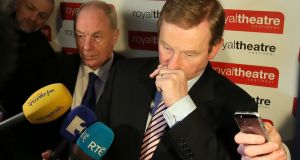 Taoiseach Enda Kenny talks to the media at the count centre in Castlebar. Photograph: Photograph: AFP

The electorate has decided not to return the Fine Gael and Labour coalition to office, Taoiseach Enda Kenny conceded on Saturday night.

Mr Kenny, who also ruled out resigning despite his government suffered a resounding defeat, said the emerging election results were a bitter blow to his party.

“It is perfectly obvious the government of Fine Gael and Labour cannot be returned to government,” he said on arriving at the Mayo constituency count centre of Castlebar on Saturday evening.

“But I have a duty and responsibility as Taoiseach to do everything possible, as head of government, to see that our country is provided with a stable government and I won’t be in possession of all the options that are open until we have the final figures.”

Asked if such a “stable government” might involve Fianna Fáil, he replied: “I’m not going to talk about any of the options that are open right now.”

The likely results means the composition of the next government is unclear, with several coalition combinations possible.

“It is a position that one never likes to be in but I want to make it clear that I expect that the Fine Gael party will be a large bloc in the next Oireachtas,” he said.

Mr Kenny, who had a 30-seat majority after the 2011 election, admitted today’s election result was disappointing. “Democracy is always exciting but it is merciless when it clicks in,” he said.

“This is a disappointing day for your party and it is particularly disappointing for those who are candidates and those who have lost their seats, particularly so those who have been serving in the Oireachtas over the last five difficult years when they were a great support to a party in government making very difficult decisions in respect of moving our country in the right direction. This is a time of great disappointment and sorrow for many of those people.”

But he expressed determination that Fine Gael would be a part of whatever government emerged after all the results were in.

“I want to make it clear that I expect that the Fine Gael party will be a large block in the next Oireachtas and from that point of view my responsibility as Taoiseach is to work to see that our country has a stable government and that it has a government that can continue the work on the progress that we’ve made over the last couple of years in bringing the benefits of a recovering economy to all our people.

Mr Kenny said he would talk to his parliamentary colleagues, members of the Labour Party and discuss next steps.

He attributed the election failure to people who in 2001 had felt too “ashamed” to vote for Fianna Fáil had no such inhibition this time.

Mr Kenny was elected on the first count in Castlebar with a vote of 13,318, giving a surplus over quota of 588 voted which are being distributed among the other candidates now.

Michael Ring received 11,275 first preference votes. Fianna Fáil’s Dara Calleary got 9,402 and both men are certain to be elected.

Separately, an Independent candidate in the Mayo constituency was forcibly removed from the Castlebar count centre by security staff after he tried to reach Mr Kenny to confront him.

Stephen Manning tried to make his way over to Mr Kenny to, as he acknowledged later, “confront him” when security staff intervened.

A heated exchange followed before Mr Manning was escorted from the building.

It was not clear if Mr Kenny, who was accompanied by his wife Fionnuala, noticed the altercation. Mr Manning polled 157 first preference votes.