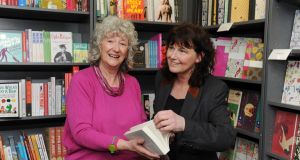 Launching the novel ‘Teethmarks on My Tongue’, Prof Jenny Williams (left with author) said it was a special writer who could cross “shark-infested waters” between being a literary critic and a novelist. Photograph: Aidan Crawley

The book tells the story of an American teenager Helen Stockton Defoe following her mother’s violent death. Helen grows up among horses on her father’s Virginia estate and the novel is set in the United States, France and Germany.

Launching the book, Prof Jenny Williams said it was a special author who could cross the “shark-infested waters” between being a literary critic and a novelist.

Prof Williams praised Battersby’s literary criticism, which she said had an international impact.

“She really knows what she talks about, which is a rare phenomenon in modern journalism,” she said.

Prof Williams said Battersby “shapes up magnificently” as a novelist with an acute sense of the importance of every word.

“It is a stylish performance laced with humour and humanity,” she added. “This novel rewards careful reading.”

Battersby paid tribute at the launch of the book in Hodges Figgis bookshop in Dublin to the late literary editor of The Irish Times Caroline Walsh and also to the former Irish Times arts editor Fergus Linehan who died this week.

She described Mr Linehan as a “gentle, funny, kind person”.

Teethmarks on My Tongue is Battersby third book. She has previously published Second Readings: From Beckett to Black Beauty and Ordinary Dogs – a Story of Two Lives.