Naomi Long: “I’m quite happy to start as the underdog.” Photograph: The Irish Times

The TUV hate the DUP And say they’re weak and wrong Yet they’ll help them out in East Belfast, Just to clobber Naomi Long. Commentator and columnist Alex Kane wrote this quatrain early in the election battle to reflect just how much some of the different branches of unionism want to bash Naomi Long in East Belfast.

They’re ganging up on what Alliance has dubbed its “Ginger Ninja” candidate. Some unionists might find that unfair.

Jim Allister’s Traditional Unionist Voice party does detest the DUP yet it, along with Ukip and more importantly the Ulster Unionist Party, has stood aside in East Belfast to give Gavin Robinson a solo run as he seeks to unseat the outgoing Alliance MP.

Long sensationally defeated Peter Robinson by 1,500 votes in 2010. Now he and the DUP want the seat back. Two things can happen: Gavin Robinson with a united unionist bloc behind him will be returned or Alliance supporters and centrist unionists will rally behind the Alliance woman.

This is a grudge match and the biggest contest of all in the 18 constituencies in Northern Ireland. It’s a quest by the DUP to restore lost pride for itself and Peter Robinson, who since 1979 was the dominant politician here. If his namesake, who is no relation but worked for him as an adviser, is not elected, it could hasten the First Minister’s exit from politics.

This would appear to be more Ulster Unionist and Alliance than DUP territory so the response could be telling – although DUP appeal has spread to all corners of unionism, including leafy ones.

The amount of time Long gives to people at the door is surprising. One woman in the King’s Park estate is concerned about abortion, and Long tells her she doesn’t want the 1967 abortion Act transferred to Northern Ireland but would permit abortion in cases of fatal foetal abnormality. They chat for 10 minutes.

At the next house a man tells her: “We vote Alliance, always did.” Short and sweet.

A couple in their 60s give her a grilling at the next house. “I don’t agree with you on same-sex marriage,” says the husband. Alliance voted for it in the Assembly on Monday although three of its seven members abstained, having previously been opposed. 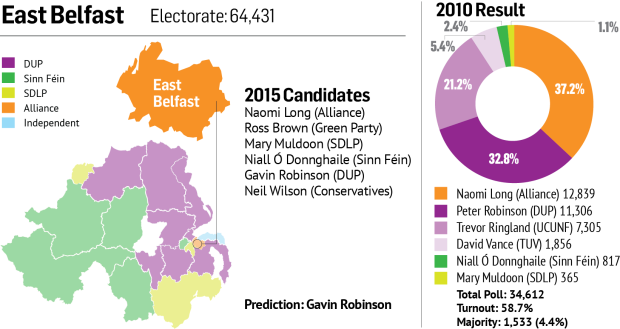 “And how could you oppose a referendum on the EU? It’s totally corrupt,” he says.

Again she wins them round, arguing that the union flag flying over Belfast City Hall on some 17 designated days a year is a good compromise.

“It is fair,” says the husband. “Nobody would have noticed if unionists didn’t put out a leaflet complaining about the decision and blaming you.”

“If the world ended tomorrow the DUP would have a statement out blaming Naomi Long,” says the candidate.

This seems to be an Ulster Unionist-leaning house, the man saying he can’t believe the party entered a pact with Peter Robinson. “You’ve two votes here,” he says.

The previous afternoon Gavin Robinson canvassed on the nearby Sandown Road, also a middle class area.

Robinson (30) is a barrister who entered politics full time in 2011. He has a master’s in Irish politics, is personable and enjoyed a good year as Belfast lord mayor on the cross-community front. Any attempt to characterise him as a DUP backwoodsman won’t wash.

Robinson is out canvassing with his father, John, and a quietly determined DUP team. Robinson knows he mustn’t lose too much ground to Alliance in areas such as this.

People are reserved, polite and noncommittal. There’s no sign of a surge to him or from him. But there is animation in some of the houses. “We were just talking about you,” says a middle-aged woman. “You don’t look like your picture.” The chat is easy and friendly, but as for how she will vote: “We are sort of wavering.”

Slightly further on the welcome is great. “I’ve known you since you were that high,” says Robinson’s former PE teacher. “I hope it is a landslide.”

The woman thinks he will come through but then expresses a little doubt as “us Prods are not great voters”.

That was astonishing, and if it happens again it will be even more astonishing. It will be because of the votes of Alliance and middle-ground unionists, plus some nationalists voting tactically.

The odds seem to be against Long. In the 2011 Assembly elections the combined vote of the various unionist parties, which she is now up against, was 67 per cent. Alliance’s was 26 per cent.

Long is undaunted by the ground to be made up. “Yes, I’ve more arithmetic to confound this time and I’m happy to confound it. I’ve gone into every election in my political career as the underdog and I have won my fair share of them. I’m quite happy to start as the underdog.”

Gerry Thornley: repercussions of captain’s challenge need to be considered

3:30 Up to 30% of housing schemes to be set aside for first-time buyers under O’Brien plan

More than 95% of people favour some form of remote working after pandemic 10:02
Cyberattack: Patient data could be released, says former HSE chief information officer 09:49
‘My first customer spent €1,000’: Successful reopening for Cork traders 08:14
Up to 30% of housing schemes to be set aside for first-time buyers under O’Brien plan 01:40
Dark web ‘dump sites’ being monitored for HSE data after hack 01:10

'Happy out' for reopening of non-essential retail