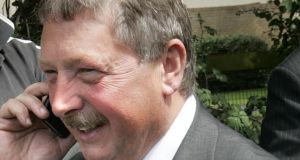 Sammy Wilson: Genial if also mischievous incumbent is favourite to secure the seat with a healthy majority. Photograph: The Irish Times

Among the eight candidates the people of East Antrim can vote for in the Westminster general election are Sammy Wilson, Ruth Wilson and Alex Wilson. Sammy reckons the majority will go for Sammy. He’s almost certainly correct.

Still, there must be a little niggle of worry that the proliferation of Wilsons might bamboozle some of the voters as they place their Xs beside the candidate of their choice on May 7th.

Which is why Wilson – Sammy, the outgoing MP – started his canvassing on April Fool’s Day. The constituency is 60 per cent urban and includes towns such as Larne and Carrickfergus and also parts of Newtownabbey, effectively a suburb of Belfast, and 40 per cent rural. It takes in three of the nine Glens of Antrim, Glenaan, Glenariff and Glendun.

As the sun blazes down on this day he remembers getting back out on the stomp. “The first week was hectic because it rained, it sleeted, it hailed, it blew. I thought what kind of election campaign is this going to be. But since then it has been very pleasant in terms of weather and in terms of response on the door.”

In this contest Wilson, who is also an MLA for the constituency, faces the main competition from three Assembly members: Roy Beggs of the Ulster Unionist Party, Stewart Dickson of Alliance and Sinn Féin’s Oliver McMullan. 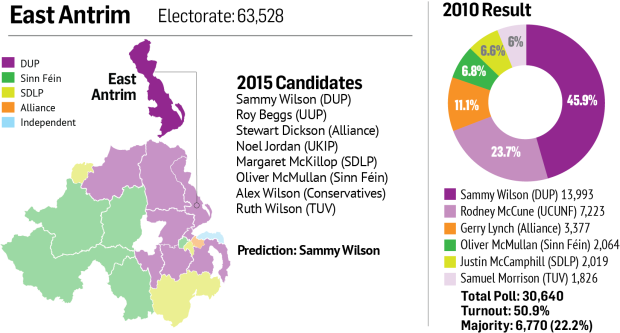 The DUP has three Assembly members while the UUP, Alliance and Sinn Féin have one each. Wilson first won the seat in 2005, taking it from Roy Beggs snr who held it for 22 years for the Ulster Unionists. Roy jnr, with the Beggs brand name, is likely to take second place when the votes are counted but is likely to be thousands of votes behind Wilson.

Which is why Wilson, who is genial if also mischievous, can relax and enjoy this campaign.

He is a Eurosceptic, agreeing that the UK’s relationship with the EU must be renegotiated. However, he fears enough concessions won’t be achieved and thinks that in a referendum Britain would be better out of Europe.

This has caused some concern for farmers, he says, who constitute a sizeable portion of his constituency. But he still has little faith in Brussels.

“You have to remember that Europe has been an up-and-down experience for farmers as well. Sometimes Europe has been of benefit, sometimes it has been detrimental,” he says. “Our message is that we want a better deal from Europe or else we want out of Europe, and that is a message that resounds with farmers too, as it does also with businesses.”

Not a runner, says Wilson. “We are part of the UK so we will stay if Britain stays; we will go if Britain goes.”

On Monday McGuinness predicted “without fear of contradiction” that neither Northern Ireland nor the DUP would play any significant role in selecting the next British government.

Wilson disagrees. He believes a hung parliament is on the cards and that the DUP could be in a strong position.

“Martin McGuinness can’t just ignore all the indications. If he knows better than the pollsters and the pundits and the bookies then I don’t know what sort of magic ball he is using. All of the indications are that it is going to be very close. And we are saying that if it is close we will have a negotiating position which will be to the benefit of the people of Northern Ireland.”