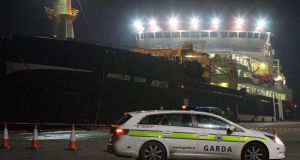 Dutch Supertrawler ‘Annelies Ilena’. It was among a fleet of Dutch vessels working some 100 nautical miles northwest of Tory Island when approached by a joint Naval Service/Sea Fisheries Protection Agency patrol on November 22nd, 2013.

The 922nd boarding by a Naval Service fishery patrol in 2013 could have been a routine affair, but for the vessel’s size and history.

The 144-metre Dutch-registered Annelies Ilena is seven times the tonnage of the patrol ship, LÉ Roisín – and multiple times that of the rigid inflatable (RIB) deployed by Lieut Cdr Terry Ward to inspect it.

The ship, formerly the Irish-registered Atlantic Dawn, is one of the world’s biggest fishing vessels, the largest super trawler and the biggest detention by the Naval Service to date.

It was among a fleet of Dutch vessels working some 100 nautical miles northwest of Tory Island when approached by a joint Naval Service/Sea Fisheries Protection Agency (SFPA) patrol on November 22nd, 2013.

The team intended to board several in the fleet in the knowledge that such ships flying other EU flags were notoriously hard to inspect. If caught, it could also be a test case for EU fishery law.

“Vessels with the ability to catch fish on an industrial scale in waters under our jurisdiction, but which almost never land here, pose particular challenges to ensure regulatory compliance,” SFPA chair Susan Steele said at the time.

Had it been 20 miles north, it would have been in Scottish waters.

It was detained and escorted to Killybegs, Co Donegal, on suspicion of “high grading”, a practice initiated, ironically, in response to stricter EU quota regulations. It involves retaining the most valuable fish and throwing smaller, less valuable, fish which are still over the minimum size back into sea.

For supertrawlers, it can make the difference of several hundred thousand euro per trip.

However, skippers were obliged to record discards of more than 50 kilos per species per day.

High grading was one of a series of charges brought, but it was withdrawn by Judge John O’Hagan in court.

The jury found the vessel owners guilty on three charges, including illegal discarding and logbook infringements. The owners were fined €105,000, but, significantly, avoided forfeiture of gear and catch.

The State’s application for bail of €5.8 million for the vessel reflected the value of catch and gear on board and the potential extent of a fine if there was a guilty plea.

However, Judge Kevin Kilrane set it at €250,000 in Donegal District Court, and a subsequent attempt by the Director of Public Prosecutions to overturn his decision was refused by the High Court.

The Annelies Ilena, which has a freezer built to hold enough fish for 18 million meals, has been run by Dutch consortium Parlevliet and van der Plas (P&P) since it was sold by the late Kevin McHugh’s company in 2007.

Mr McHugh had attracted much controversy after he commissioned the €63 million ship in Norway, exceeding EU tonnage restrictions.

The EU initiated infringement proceedings against the State, but dropped these after the intervention of then taoiseach Bertie Ahern and former EU commissioner David Byrne.

Its current owner, P&P, is one of four multinational companies running some 30 European factory vessels which are registered in a number of different EU states so as to take most advantage of quotas.

However, its vessels and those of other European owners have been under scrutiny at a time of growing public unease about catching capacity at sea.

In December 2012, the 141-metre German-registered Maartje Theadora owned by a P&P German subsidiary was fined €595,000 – then the largest penalty imposed for illegal fishing in the EU – by the French authorities.

The company complained that the tie-up had cost it more than €1 million in lost fishing time.

The company is also owner of the world’s second largest supertrawler, Margiris, which has fished recently in these waters, but which was banned from Australia in 2012 after protests over its deployment there by former owners, Seafish Tasmania.