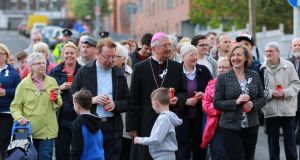 Catholic Archbishop of Dublin Diarmuid Marting flanked by locals on a march against the violence and neglect that has blighted the north inner city. Photograph: Nick Bradshaw

Mothers and fathers, brothers and sisters, children in prams, community activists, local priests, politicians and the Catholic Archbishop of Dublin gathered in the north inner city last night to voice their collective opposition to violence and demand greater State investment and support for the area.

Many residents sporting white ribbons to symbolise their yearning for an end to violence walked from four parish churches – St Agatha’s in William Street, St Laurence O’Toole in Seville Place, Our Lady of Lourdes in Sean McDermott St, and St Joseph’s Church of East Wall – to the Buckingham St, converging on the monument, Home by Leo Higgins, erected in memory of those from the area who over many years died from heroin.

In more recent months, nearby the Sheriff St area has been drawn into the gangland feud between the Kinihan and Hutch crime organisations resulting, in one instance, of a bystander, Martin O’Rourke (24), being shot dead at the junction of Sheriff Street Lower and Oriel Street Upper in a case of mistaken identity.

The organisers of the procession, the Inner City Organisations Network said people had become frightened in their own communities as a result.

The violent gangs had to be defeated, said Archbishop Diarmuid Martin, who walked down Buckingham Street with about 70 of the 300 or so people who conparticipated in the procession.

“These men have two sets in their armoury: their guns and our silence,” said Archbishop Martin.

What the people of the inner city wanted was for their children to grow up safely and in communities of which they were proud.

Network chairman Seanie Lamb said people wanted to display unity and solidarit. He urged the Government to act “on the problems that have affected this community for some time”.

On Monday, he and other community leaders had met the Tánaiste and Minister for Justice Frances Fitzgerald and Garda Commissioner, Nóirín O’Sullivan, who used to work out of Store Street station as a young garda.

“We told them of our concerns and how the drugs issue is a symptom of social disadvantage, ” said Mr Lamb. “The commissioner promised that when she gets the numbers, she will distribute some of them here.

“We also found the Tánaiste interested. She listened and said she would raise the issues with her Cabinet colleagues. In fairness, she listened.”

Local community worker Fergus McCabe said the north inner city was suffering from “years and years of neglect and disadvantage and its time to put an end to it.”

There was a minute’s silence for peace and Archbishop Martin led a prayer for peace.