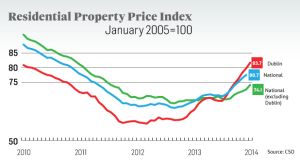 Dublin property prices have risen by almost a quarter in the past year figures from the Central Statistics Office show.

Property prices continue to climb nationwide rising by 2.9 per cent in October; prices are now 16.3 per cent higher than they were in the same period last year.

The increase is most marked in Dublin where prices rose by 3 per cent in October and are now 24.2 per cent higher than they were in the same period in 2013 according to the Residential Property Price Index which is compiled by the Central Statistics Office (CSO).

Apartments saw the sharpest year-on-year price increase; Dublin apartment prices were 26.9 per cent higher in October than in same month in 2013.

Outside Dublin property prices rose by 2.8 per cent in October, almost on par with the increase in the capital, although the annual price increase nationally at 8.3 per cent remains well below that experienced in Dublin.

However, Dr John McCartney, director of research at Savills Ireland and a former CSO statistician, said he believed that a slowdown in property prices is on the horizon.

“I think we’re going to see a slowdown in house price growth...because the amount of cash that’s been driving the market for the past two years is starting to recede,” he said.

Dr McCartney said in the case of cash buyers the “mattress money” invested in housing in the past number of years had “mobilised really rapidly but once it’s spent it’s spent and I think that money has washed through the market as this stage”.

He said heightened activity by investors in the residential property market had been fuelled by a high yield on rental income relative to the amount paid for the property but added that “yield is becoming suppressed again as prices shoot back up” meaning the market was less attractive to investors.

Dr McCartney said a dampening of interest by investors would be accelerated when the Capital Gains Incentive - an inducement which means certain property investments do not attract capital gains tax in the first seven years of ownership - is withdrawn from December 31st.

Dr McCartney added that proposals by the Central Bank to set most loan-to-value ratios at 20 per cent and to limit mortgages to 3.5 times gross income would also feed into a slowdown in prices.

He said current high property prices were being fuelled by “too many bodies chasing too few beds” adding the supply of new homes remained “imperative” for the long-term sustainability in the property market:

“Boosting supply is ultimately the key factor for sustainable price growth in the long-run,” he said.