Dozens gather in Dublin in solidarity with Egypt protesters 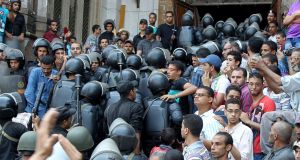 Policemen move into a mosque during clashes with supporters of deposed Egyptian president Mohamed Morsi inside a room of the al-Fath mosque in Cairo today. Photograph: Muhammad Hamed/Reuters

Dozens of people gathered outside the Egyptian embassy in Dublin this afternoon to make a stand against violent military crackdowns on protesters in Cairo and the rest of country.

Hundreds of people have been killed this week after tens of thousands took to the streets to protest against the ousting of Egypt’s first democratically elected president, Mohammed Morsi.

Today’s demonstration was organised by the Irish Anti-War Movement (IAWM) and John Molyneux, from the group’s steering committee, described what has happened as a “terrible massacre”.

“The situation is terrible because there is slaughter taking place on the streets,” he said.

“This is being done by the Egyptian military [WHO]are trying to to re-establish a military dictatorship that existed under Mubarak.”

People lined up outside the embassy’s entrance held placards saying “Irish Government must condemn the massacre,” “against military coup” and “revolution until victory”.

Another woman held a Morsi portrait underneath which were the words “The Legitimate President”.

Although some of the protesters disagreed politically they were all campaigning for the right to express these differences freely in their native country.

People Before Profit and United Left Alliance TD, Richard Boyd Barrett, said that if the “barbarism” which had been witnessed happened anywhere else human rights organisations and western governments would be “screaming” for an end to it.

“It seems that the Islamaphobia that we have witnessed so often in the western world over recent years is at work again,” he said.

“Somehow muslim lives are worth less than other lives when it comes to western policy.”

Mr Boyd Barrett also said that the US Government was “absolutely supportive of this attempt by the military elite in Egypt to crush the revolution”.

After he said the Egyptian ambassador should be “kicked out” of Ireland the crowd burst into chants of “out, out, out”.

Mr Boyd Barrett and Mr Molyneux both called on the Irish Government to condemn the violence in Egypt and also for the United States to cease providing aid to the the country’s military.

The demonstrators stopped outside the US embassy chanting “Obama, shame on you” and “we don’t want your aid” before proceeding to the Department of Foreign Affairs on St Stephen’s Green.

On the way one of them, Mahmoud Ahmed from Domyat, told The Irish Times what the situation in Egypt was like on the ground.

“It’s devastating, there’s bullets from everywhere,” he said while adding that there are also snipers on the Minaret of the mosques.

“At night there’d be this laser which if it points at one person for two seconds the person dies straight away,” he said.

“It went on me, I ducked down, the person behind me got the bullet.”

Mr Ahmed said he has been shot in his right shoulder and elbow as well as in his leg and back.

Khalid Moustafa, from Alexandria, was another one of the protesters. He said the they were “begging” for help.

“Most of the world is doing nothing,” he said. “Why haven’t they done anything? Are these people not humans?”

“Because these people are Egyptians nobody really cares.”