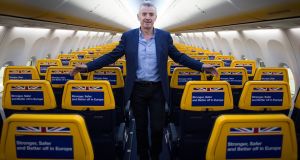 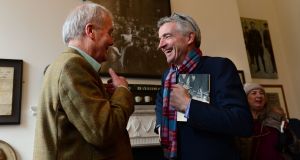 Michael O’Leary with Kevin Myers at the launch of the former Irish Times’ columnist’s latest book at The Little Museum of Dublin. Photograph: Dara Mac Dónail

Donald Trump’s presidency will be good news for the airline industry if a resurgent fracking industry leads to more cuts in the price of oil, Ryanair chief executive Michael O’Leary has said.

Mr O’Leary said the success of Trump’s administration remains difficult to predict but that Europe needed a strongly performing US economy for its own benefit.

“I think you’ll see downward pressure on oil prices which will be good I would imagine for certainly the airline business.”

Trump’s election has rattled environmentalists given his unpredictable, often vacillating position on issues.

While he appeared to have tempered previously strong views on the Paris climate change agreement in a New York Times interview in which he said he now had an “open mind”, the president-elect has made controversial pledges to both the natural gas fracking and coal sectors.

“The challenge for Trump is he could be a very good president and he could also be a pretty average president. He is following Obama who I think hasn’t been particularly special despite getting elected on a wave of hope and positivity. I think he has failed really to do much with his presidency.”

Mr O’Leary was speaking at the launch of former Irish Times columnist Kevin Myers’s memoir A Single Headstrong Heart in Dublin on Wednesday.

Directing his attention to domestic matters, Mr O’Leary predicted the Government would likely capitulate to pressure from unions on the issue of public sector pay and argued that the economy was not yet ready for restoration.

“Weak governments tend to bend and they bend wherever the pressure gets applied which is by public sector unions,” he said.

He said the public sector employed about 300,000 people who are funded by 1.2 million workers in the private sector, but “nobody’s paying attention to them”.