Doctors given until June 5th to commit to free GP care 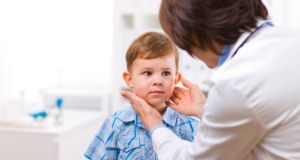 The introduction of free GP care for children is one of the Government’s key healthcare reforms. While a deal was reached with the IMO several weeks ago, the plan has been strongly opposed by the National Association of General Practitioners

Family doctors have now been given until June 5th to sign contracts if they wish to take part in the Government’s new scheme to provide free GP care to children under age six.

The introduction of free GP care for children is one of the Government’s key healthcare reforms. However, while a deal was reached with the IMO several weeks ago, the plan has been strongly opposed by another group, the National Association of General Practitioners.

The initiative has divided family doctors across the country in the run-up to the deadline for signing up, which was originally scheduled for Monday.

In a circular to members, the chairman of the IMO’s GP committee, Dr Padraig McGarry, said it had “received assurances on a number of key issues relating to the proposed contract”.

He said the HSE had agreed that GPs now had until June 5th to return contracts as the patient registration system was scheduled to go live early next month. He said it had also been confirmed that during the summer months the under-six patients of doctors who refused to sign up to the new contract would not be reassigned to other GPs who had agreed to take part in the new scheme.

“GPs who have not signed up to the contract will be paid for such patients on current GMS rates and not on the new rates applicable to the under-six contract.”

Dr McGarry said the clarifications and assurances received from the HSE addressed many of the concerns that GP have raised in recent weeks. The IMO had sought legal advice on some of the issues raised and submitted that advice to the HSE for its review.

“The HSE has now written to the IMO to confirm that it agrees with the IMO’s legal advice and that the advice may be regarded as ‘contractually binding and may be relied upon by under-six contract holders and the IMO’.”

The IMO said in the new assurances the HSE/Department of Health had confirmed that the Minister for Health could not set new fees for GP services without having regard to the process for negotiation which was set down in a recent framework agreement.

Dr McGarry said the days of attempts at unilateral actions by the Department and HSE were over.

The IMO said other assurances it had received from the HSE/Department of Health were:

* any new GMS contract will be a standalone contract negotiated between the HSE and the IMO, and that the under-six contract will not be a template for that new contract;

* the under-six contract is intended as an interim contract only, and a review is built in at the latest by August 1st next year;

* primary care teams are beyond the scope of the under-six contract;

* no additional diagnostic services or pilot scheme will be imposed without consultation with the IMO and agreement with individual GPs;

* any new ICT initiatives (eg e-Health and management information initiatives) must be agreed with individual GPs prior to their introduction;

* the working week provisions under the under-six contract are the same as under the current GMS contract;

* GPs may carry out period assessments on child patients aged two and five opportunistically and not at the exact ages being reached;

* only those doctors who are on the specialist register can take up the under-six contract;

GPs are independent contracts, not employees of the HSE, and will have to make up their own mind on whether to accept or reject the proposed new scheme.

Last Friday GPs were warned that they risked breaching competition law if they shared with other doctors their intentions in relation to the under-six contract.

The Competition and Consumer Protection Commission said it had written to the National Association of General Practitioners expressing “grave concerns” that the organisation had been conducting what amounted to “an ongoing and escalating campaign designed to encourage its members to engage in a collective boycott of the under-sixes contract contrary to EU and Irish competition law”.

Separately the National Association of General Practitioners on Friday started a legal challenge to the Department of Health/HSE plan for children under six . On Saturday it said it did not believe that the Competition and Consumer Protection Commission needed “to get involved in an issue that, at its core, involves patient rights”.

“Its actions stem from the duty of doctors to advocate for the rights of vulnerable patients who are in real need of free care.”

The association’s chairman Dr Andy Jordan said: “”With hundreds of patients on trolleys in our emergency departments every day and medical cards being removed from or denied to cancer patients, it is not appropriate to invest scarce public funds into providing free care to any group of people who do not have a genuine medical or financial need.”