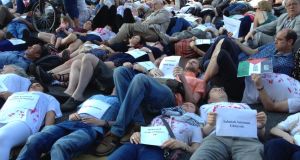 Organisers called the protest a ‘die-in and asked the crowd to lay on the ground holding signs with the names and ages of Palestinians killed in the conflict. Photograph: Erin McGuire

Pro-Palestinian activists rallied in front of the Department of Foreign Affairs yesterday to mark the 15th day of Israel’s offensive against Hamas.

Members of Gaza Action Ireland and the Ireland Palestine Solidarity Campaign called on the Irish government to take action against Israel’s military offensive by expelling the Israeli ambassador and boycotting Israeli consumer goods.

Organisers called the protest a “die-in” and asked the crowd to lay on the ground holding signs with the names and ages of Palestinians killed in the conflict. Protestors later marched to the top of Grafton Street for another “die-in”.

Independent TD Mick Wallace, who is “more than likely” facing a court case after his arrest at Shannon Airport on Tuesday , called the conflict in Gaza a “massacre” and said human rights were being “trampled”.

Retired Leinster rugby player Trevor Hogan, who was part of the flotilla that attempted to break Israel’s blockade of Gaza in 2011, said the purpose of the protest was to show solidarity with people living in Gaza and to remember the people who have died. Mr Hogan said he hopes Irish people take a stand “because that’s what Irish people do”.

Members of the Irish Palestinian community spoke at the rally. Among them, Irish- born Noelle Naser said she worried about her cousins and maternal grandparents in Gaza, some of whom were wounded in a recent attack.

Several speakers highlighted the resolution passed by the UN Human Rights Council yesterday which launched a commission of inquiry into Israel’s Gaza offensive. Ireland and other European countries abstained from voting in the resolution, which organisers of the protest called “shameful”.

Earlier yesterday Lord Mayor of Dublin Christy Burke met with the Israeli Ambassador to Ireland Boaz Modai to express his concerns about the situation in Gaza. He said in a statement: “As first citizen of Dublin I expressed my concerns about the appalling situation in Gaza which has led to an unacceptable loss of life on all sides. I would ask all of the protagonists in this conflict to refrain from any action which may result in civilian casualties.”

Mr Burke told the Irish Times he was “appalled” that over 600 Palestinians, including civilians, had been killed in the conflict, and he hopes the ambassador conveys that message to the Israeli government.

As for the protestors’ calls to expel the Israeli ambassador, Mr Burke said that expulsion is not the way forward because Mr Modai is a diplomatic link who can relay messages of concern to his government.

Garda pleads guilty to causing fatal crash on M4 motorway 15:46
Green leader says left-leaning coalition would be unlikely to last 15:44
Fire detection system on doomed trawler did not work 15:30
Man on trial for garda’s murder admitted lying about movements 15:24
Woman who says she was trafficked from Nigeria wins court challenge 15:09