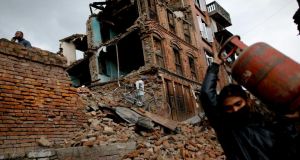 A man carries a bicycle salvaged from a destroyed building as another carries a canister of gas in Bhaktapur, Kathmandu, Nepal. The number of people killed in the earthquake in Nepal passed 5,000, according to official figures. Photograph: Diego Azubel/EPA 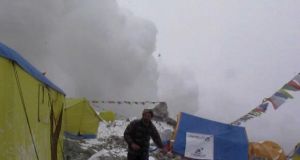 I captured this just as we turned around and saw the Pumori avalanche about to hit our camp at Everest base camp in Nepal (Paul Devaney).

A Dublin-based Nepali engineer and an Irish climber who were both in Kathmandu when the earthquake struck have spoken of “desperation” and “devastation” among earthquake survivors who have not yet received sufficient aid.

Irish-US trekking company director Ian Taylor, who was due to lead a trek to Island Peak and Everest base camp, told The Irish Times that “very little is happening on the ground” to assist people in the capital.

He described how he had been mobbed when bringing water and food to a refugee camp close to the Thamel district of Kathmandu.

“The people are facing great challenges, but are still calm and smiling as always,” he said.

Electronic engineer Deepesh Man Shakya, who is president of the Nepal-Ireland Society, was on his annual visit to his parents in Kathmandu when the magnitude 7.8 earthquake occurred last Saturday.

The devastation he had witnessed close to his home was “beyond normal imagination”, he said.

“I was resting on my bed with my iPad when it started to shake. I had to hold the stairs and balance myself to make sure I was not thrown away due to violent movement,” he said. His parents managed to slide down the stairs to the first floor of their building.

“It was the moment where my mind started to ramble – am I going to die now, is the house going to topple?” he said, and there was “violent noise” outside as if from a storm.

“It briefly stopped but it started again,” he said. “The ceiling fan was swaying, my heart was palpitating.”

The family stayed outside all night with some 25 neighbours “crammed in a small place” as a series of aftershocks occurred.

Next morning, they learned that a seven-storey house close by with 100 people inside had collapsed, and that many of the heritage sites in Kathmandu, including Dharahara, also known as the Bhimsen tower, had been reduced to “rubble”.

“My cousin was in a cinema hall just in front of the Bhimsen tower,” Mr Shakya said, “and managed to escape in time.”

His cousin described it as “like a Hollywood disaster movie where people ran for their lives, with glasses shattering all over the place”.

“An elderly couple died just 20 minutes away from my place,” he said. “One of them was beheaded, and only the body was found.”

In the 72 hours after the earthquake “rumours” became an issue, Mr Shakya said, but he described how transportation is still very limited, and some shops had opened but were already running out of supplies.

Nepal-Ireland Society committee member Jivan Trimalsinas, who is based in Dublin, said that his family in Kathmandu was safe and unharmed.

“My father was five years old when the last earthquake occurred, but he says that this one was much worse,” Mr Trimalsinas said.

The situation for the many injured and homeless in some 33 districts of the land-locked country was extreme, he said.

The Nepal-Ireland Society has established an iDonate account online for donations, which, it says, will go directly to those most in need.

Mr Shakya also appealed for disaster management expertise, and paid tribute to the Irish aid agency personnel who had already begun to arrive in Nepal.

Dubliner Paul Greenan, who sustained injuries in the avalanche which swept through Everest base camp, has been evacuated to Norway, following negotiations between the Department of Foreign Affairs and its Norwegian counterpart.

The department said there were four Irish citizens believed to be in Nepal with whom contact has still to be made.

In the past 24 hours it has established contact with six of 10 still unaccounted for earlier this week, among a total of 150 Irish believed to be in the region.

Some of the four “may be in remote areas where communications would be sporadic at the best of times, or may not in fact have been in the area at the time,” it said.

The department reiterated that there were “no suggestions at this stage of any Irish fatalities”.