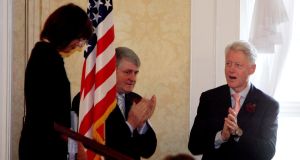 Denis O’Brien and Bill Clinton applaud Mary Donohoe, project founder, at a fundraising breakfast for The Rose Project-Aids in Africa, in Dublin in 2005. Photograph: Eric Luke

Denis O’Brien used his connections with Bill and Hillary Clinton’s charitable foundation to help with earthquake relief efforts in Haiti through his Caribbean mobile firm Digicel.

Newly disclosed emails show that the Irish entrepreneur contacted Doug Band, Mr Clinton’s long-time close aide who ran the Clinton Foundation, 10 days after the January 2010 earthquake asking for help to make contact with the state department, where Mrs Clinton was secretary of state at the time. Mr O’Brien wanted to transport relief supplies into the Haitian capital Port-au-Prince and to evacuate his employees.

“We are finding it impossible to get landing slots to bring in communication equipment and engineers into Port au Prince,” Mr O’Brien said in an email to Mr Band.

“Is there any way you can give me a high-level introduction to someone in the State Department to get this resolved rapidly? I am so sorry to bother you but I am not making any progress through conventional channels.”

“Never a bother. Will do what we can,” Mr Band emailed Mr O’Brien back, copying Amitabh Desai, the director of foreign policy at the Clinton Foundation, on the email and telling him to “pls [sic] get on this.”

“This is Denis O’Brien, a friend of President Clinton and one of the largest employers and do-ers in Haiti, who also has been helping post-earthquake,” he told them.

Haiti is one of Digicel’s largest mobile phone markets.

“This WJC VIP just called again from Jamaica to say Digicel is getting pushed by US Army to get comms back up but is not being cleared by USG [US Government] to deploy into Haiti to do so,” he said of Mr O’Brien.

The emails show that Ms Klevorick gave special attention to any individuals identified as being close to the former US president with the abbreviations “FOB” — friend of Bill or “WJC VIPs.”

“Need you to flag when people are friends of WJC,” she wrote in another to the Clinton Foundation. “Most I can probably ID but not all.”

The emails featured in ABC News stories yesterday. Republican presidential nominee Donald Trump tweeted a link to the story yesterday afternoon, using it to attack Mrs Clinton, his Democratic opponent in the race for the White House.

He alleged that the state department under Mrs Clinton gave “special attention to ‘Friends of Bill’ after the Haiti earthquake. Unbelievable!” he tweeted.

“I don’t see any problem contacting anybody in the United States if I’m bringing in emergency aid where people are dying on the street because of lack of medical attention,” he told ABC in an interview.

“I make no apologies for that.”

He said Bill Clinton was “encouraging to everyone” to invest in Haiti after the earthquake. “It was like Noah’s Ark,” he said of the former president’s relief efforts.

Mr Trump released a statement criticising the foundation for facilitating the building of a Marriott hotel in Haiti, owned by the Irish businessman, “while neighborhoods still lay decimated after the earthquake.” The hotel project also featured on ABC News.

Mr O’Brien told the US television network that he recognised the “little bit of a contradiction” building a Marriott hotel close to poor Haitian neighbourhoods, but justified the hotel saying: “If you want to get foreign investors to come down to Haiti, they want to stay in a branded hotel.

“They want to stay in [a] comfort environment. And they want to have a place to have meetings.”

In the past two weeks, Mr Trump has ramped up his attacks on Mrs Clinton and her ties with the Clinton Foundation donors during her time as secretary of state between 2009 and 2013, drawing attention in one statement release by his campaign late last month to the connections between the Clintons and their “friend” Mr O’Brien.