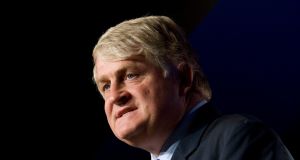 In dragging Mr O’Brien into his battle with Mrs Clinton, the Democratic Party nominee, Mr Trump also appeared to criticise the Irish Government over its relationship with the Clinton Foundation, the global aid charity set up by former US president Bill Clinton which he now runs with his and Mrs Clinton’s daughter, Chelsea.

In response yesterday, Irish Aid – the overseas aid wing of the Department of Foreign Affairs – made available to journalists a briefing note detailing Ireland’s relationship with the foundation.

It showed that Irish Aid has helped fund to the tune of €156 million three aid projects in Mozambique and Lesotho that are governed by three separate memorandums of understanding with the Clinton Foundation and an offshoot, the Clinton Health Access Initiative.

In each, the money funded Aids and HIV prevention, treatment and support programmes and general health initiatives aimed at children.

The email, which was over 3,500 words long, repeated a description, used by Irish Central, a New York-based media outlet aimed at an ex-pat Irish audience, describing Mr O’Brien as “one of the most reviled figures in Ireland”.

The email was a collection of articles and comments, published by a variety of outlets, including The Irish Times, many of which were not complimentary of Mr O’Brien.

They included Forbes magazine’s observation, “In recent years, O’Brien has been on a deal-making binge in Ireland, snapping up distressed assets on the cheap and turning them around”.

Neither Mr O’Brien nor Mr Lowry accept the tribunal findings.

Mr O’Brien has reacted in the past to allegations such as those repeated in the Trump email by suing.

Asked yesterday by The Irish Times whether Mr O’Brien had, or would, contact the Trump campaign, issue proceedings against Mr Trump or otherwise react to the email, a spokesman for Mr O’Brien did not respond.

Irish media lawyer Andrea Martin noted the laws covering defamation and libel in the US gave greater latitude to comments being made about high-profile people.

“What is notable is the clear reluctance of the Irish media to report what Mr Trump has said,” she said.