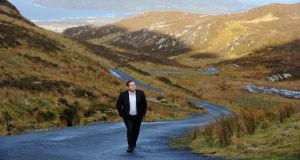 Pádraig Mac Lochlainn: “It’s painful but it’s not the end of the world. It’s about going back to basics”

Sinn Féin’s Pádraig Mac Lochlainn, after his defeat to Thomas Pringle in Donegal, learned two lessons from the axioms respectively attributed to the late US House of Representatives speaker Tip O’Neill and philosopher Friedrich Nietzsche.

One, that all politics is local and, two, that whatever doesn’t kill you makes you stronger.

He is still hurting after Sinn Féin suffered the loss of one of its two seats in Donegal.

But the spirit is starting to lift again and if he gets the nod from Gerry Adams he’ll be back out on the road seeking a place in the Seanad and plotting how to regain his lost Dáil seat. “It’s painful but it’s not the end of the world. It’s about going back to basics,” he says.

Next time Mac Lochlainn (42) will be paying more attention to northeast Donegal and, in particular, his Inishowen base.

He acknowledges that in Donegal, a five seater, there was a perception that as party justice spokesman he was appearing a bit too often on RTÉ and the Vincent Browne show talking about national issues such as Travellers’ rights, asylum seekers, refugees and Garda reform, and not paying sufficient attention to bread and butter matters such as local jobs and services.

Mac Lochlainn said it was an “unfair perception”, stressing that he put in the work locally. “I get up early in the morning.” Nonetheless he agreed it was a perception locally.

McConalogue got the majority of the Inishowen vote, a majority that Mac Lochlainn, having topped the poll in the 2011 election in Donegal North-East, expected to garner.

“Clearly Fianna Fáil succeeded in Inishowen in saying I was safe and Charlie was under threat.”

The Buncrana man has a jaundiced view of politicians who attend every wake and funeral in their constituency. His principled stand was only to attend those of people he or his family knew.

“That is a big thing in rural Ireland. Rural people like to see you more than urban people, I think. It’s a difference of culture. I need to rebalance and reflect that culture.”

One of Sinn Féin’s big mistakes was putting forward three candidates instead of two.

“We did not select three candidates for the fun of it. The research that we carried out suggested there was the potential for a third seat.

“We just did not see the return of the old Fianna Fáil voters back to their homeplace.”

But, as Mac Lochlainn observes, Doherty ended up with 3,000 votes from his side of the constituency. That wasn’t supposed to happen and played badly against him, as did Doherty being eliminated relatively early in the race.

This militated against Mac Lochlainn getting a sufficient number of transfers to be ahead of Pringle (Independent) at close of play in the 13th count on Sunday night.

Mac Lochlainn doesn’t buy the analysis he had heard that “if only you’d get rid of Gerry Adams you’d rule the world”, pointing out that before the election Sinn Féin had 14 seats and now it has 23.

There is no criticism of the Sinn Féin president but he does look to a day beyond Adams.

“Gerry himself is going to be 68 later this year. He is not going to be around forever. In the next number of years there will be a transition period to a new leadership.

“He is clearly not going to be around for another 30 years - I mean politically . . . This will take its own path in the next number of years.

But he will be very hard to replace.”