Dead dolphins in Kerry lead to call for EU action 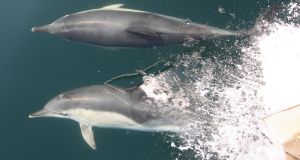 The discovery of three dead dolphins in the space of a week on the west Kerry coast has prompted a call for the EU to place observers on large fishing vessels. Photograph: Patrick Lyne

The discovery of three dead dolphins in the space of a week on the west Kerry coast has prompted a retired State fishery inspector to call for the EU to place observers on large fishing vessels.

Mr Kevin Flannery, a rare fish expert and former inspector with the Sea Fisheries Protection Authority (SFPA), said that one of the three dolphins had a rope around its tail, which would suggest it had been discarded by a fishing vessel.

All three were common dolphins, and were found in separate areas on the west Kerry coast between Dingle and Smerwick harbour in the last five days.

Mr Flannery said that he could not definitely prove the causes of death of the dolphins, but it was “no coincidence” that a fleet of non-Irish fish factory ships were working 19km west of the Blasket Islands.

“The supertrawlers, fitted with pumps and seawater tanks, can suck up dolphins and other marine mammals,”Mr Flannery said.

“The Irish fleet of pelagic ships has been tied up for weeks, but these ships, mainly of Dutch registry, are still working away out there,” he said.

“On a smaller vessel, a dolphin or other marine mammal caught in a net could be returned to sea alive.”

He said that, while Irish waters have been a whale and dolphin sanctuary since 1991, action had to be taken at EU level to ensure marine mammals received adequate protection at sea.

Placing observers on EU fishing vessels to investigate breaches of regulations has long been a source of disagreement among member states.

The US National Oceanic and Atmospheric Administration’s national marine fisheries service has deployed observers to collect catch and bycatch data from US commercial fishing and processing vessels since 1972.

An investigation by The Guardian published in 2012 reported that observers on some European vessels working in the Northwest Atlantic Fishery Organisation (NAFO) area were “regularly intimidated, offered bribes and undermined by the fishing crews they were monitoring”.